A couple of days ago, Benjamin Yuen (袁偉豪) posted photos of him and his wife, Bowie Cheung (張寶兒), at the 2020 TVB Anniversary Awards. As the 39-year-old actor has a 10-year age gap with his wife of almost two months, netizens verbally attacked him for his aging looks and even labeled the former Mr. Hong Kong winner as “ugly.” Fired up, Benjamin immediately penned a lengthy post on Instagram responding to those comments.

He wrote, “My body has its good and bad days too. I spend many hours filming each day, and I can’t eat because I don’t want to look fat on-screen. It really isn’t easy.”

Continuing, he explained that he chose to exercise during his half-day off before the ceremony, which is why he looked tired and not at his best. He said, “I can’t help it. I don’t want to waste a second of my life – even if you think I’ve gotten out of shape after marriage or that I’ve become an ugly man.” 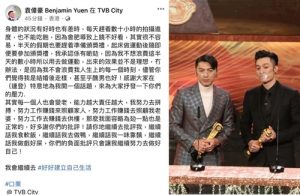 He went on to share that everyone gets older, and with more ability comes greater responsibility. He has been working hard to earn money to take care of his family and pay off the mortgage, which has led to his fatigued appearance these days. He ended the post with, “Thank you for your criticism. Please continue to criticize me and say that I am a gold digger, say that I am a prostitute, say that I depend on others, or that my acting sucks. Your criticism will only make me work harder on myself. I will continue to build on my own life.”

Many of Benjamin’s fans and good friends, including Yeung Chiu Hoi (楊潮凱), Brian Tse (謝東閔), Jazz Lam (林子善), and Joel Chan (陳山聰), immediately left messages to show their support and encouragement. Though many could sense the actor’s anger then, he seems to have recovered, as he updated his Instagram with photos at 5 a.m. after getting up for work with some pictures of the sunrise and bees collecting nectar.

Benjamin Yuen Gets in Heated “Nachos Dispute” at Movie Theater