Benjamin Yuen Transforms into a Woman for “Three Women, One Gene” 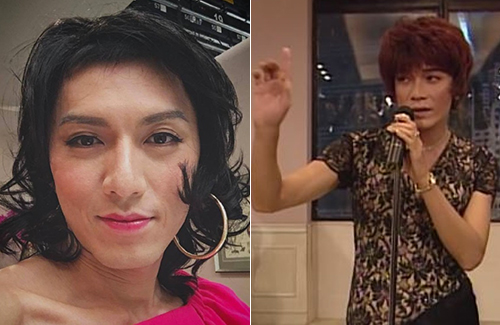 Benjamin Yuen (袁偉豪) shocked some fans when he uploaded a portrait of himself crossdressed as a woman on social media.

The 35-year-old, who has been shooting the TVB drama Three Women, One ‘Gene’ <三個女人一個「因」>, took a selfie of himself dressed up as a woman and shared it online. He wore a black wig, pink lipstick, and a bright pink off-shoulder shirt that revealed his small collarbone.

The look shocked many fans and netizens; some were pleasantly surprised that Ben had kept a bit of his good looks as a woman. A few said Ben’s appearance reminded them of Gallen Lo’s (羅嘉良) iconic performance of “Diana” in the classic 1999 drama, Feminine Masculinity <先生貴性>.

Three Women stars Mandy Wong (黃智雯) as Evie, a woman who suffers from dissociative identity disorder. She has three distinct personalities and is romantically involved with three different men throughout the story. Ben plays Kai, Mandy’s close childhood friend. Three Women, which is expected to wrap up filming this month, is inspired by the South Korean drama Kill Me, Heal Me.

7 comments to Benjamin Yuen Transforms into a Woman for “Three Women, One Gene”