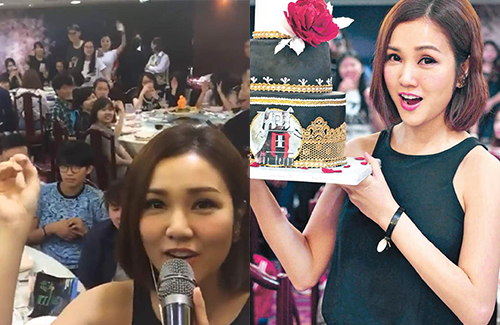 Kay Tse’s (謝安琪) debut drama Blue Veins <殭> finally ended on Sunday with the 33rd episode. In the series finale this weekend, Kay—who portrays the vampire Lam Mung-nam—reclaims her lost memories and returns to the future. She appears in four different flashbacks, in a story that spans over 500 years.

Blue Veins, a fantasy drama that also stars Kevin Cheng (鄭嘉穎) and Grace Chan (陳凱琳), premiered on April 11 to underwhelming viewership scores. Though the series failed to reach the top ten of TVB’s most-viewed programs of the year, the series did garner a lot of online gossip and fan reactions.

This past Sunday, Kay held a celebratory banquet with her fans to watch the series finale. She shared the experience live on Facebook, attracting 30,000 more viewers.

For the series finale, Kay surprised her fans with multiple costume looks, reflecting her character’s history in the past 500 years. Her character first appears in the late Ming Dynasty, to the early Republican era of China, to the pre-modern period, and finally 100 years into the future, where she originally came from.

Fans said their favorite outfit of Kay’s was the body-hugging 1920’s cheongsam look, which showed off her voluptuous figure. Kay’s outstanding body became a trending online topic for a while.

Kay, on the other hand, preferred her 1930’s look, “I really have to thank the costume team for their efforts,” said Kay. “Although the flashbacks were very short scenes, the team worked hard in helping me design my looks. As for my favorite, I prefer my pigtails pre-modern look.”

There were some surprising turn of events in the Blue Veins finale. Many major characters died, and the love triangle between Kevin, Kay, and Grace was never exactly resolved, although Kevin and Kay do end up together.

Fans of Blue Veins said the writers wrote the ending in a way that would make it possible for the show to continue with a sequel or a prequel. In regards to filming a second Blue Veins series, Kay said she is happy for the fans’ support. “I’m really happy to see so many people supporting Lam Mung-nam, and I’ve received a lot of support from fans and friends as well. They told they want a second series. It makes me so happy to hear this!”

Would Kay like a second series? “I’m interested, but I’m getting older now. I don’t know if I’ll have that much energy to do another. I felt a lot of pressure when the show first aired, as I’ve realized that a lot of people were actually noticing my performance, but the show did receive a lot of love in the end. It is satisfying. I do miss the times when we all worked together. If there is an opportunity, I’ll consider it, but it definitely won’t be in the near future. It depends on the script.”