Bobby Au-yeung and Hui Shiu-hung Nap Instead of Sleep 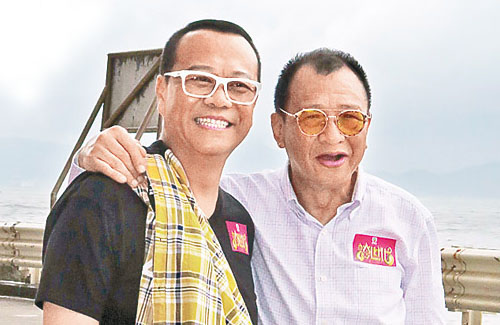 Bobby Au-yeung (歐陽震華) and Hui Shiu-hung (許紹雄) have been working day and night for TVB’s 50-episode epic My Ages Apart <跨時代>, which is due to air at the end for TVB’s 50th anniversary. Yesterday, the costars battled the heat all day for a scene in the show, but the two veteran actors have managed to find joy in their misery.

The scene they filmed yesterday followed Hui Shiu-hung (Benz) running to middle of the road after seeing a car flip, thinking the man inside the vehicle was Bobby. It was over 30 degrees Celsius (nearly 90 degrees Fahrenheit) when they filmed the scene. Wearing a thick jacket, Benz was dripping with sweat.

After filming the scene, the costars met with the press to share their experiences. Speaking about the hot weather, Bobby said, “Benz has had it much harder. His filming schedule ended at 04, 05 this morning, but then he had to be here again at around 04, 05 for his booking (call time) at 0530!”

Benz added that he didn’t even have time to shower. “But I did manage to take a quick half hour nap in the car. I had some a la carte in the car. Took naps whenever I can to recharge.”

Bobby said, “It’s my time to suffer tonight. My schedule doesn’t end until 28 (four in the morning). I haven’t checked my next schedule yet though. I don’t want it to affect my performance today.”

Despite having to film in hot weather, Bobby said he still feels thankful. “We’re considered lucky. At least we don’t have to wear heavy costumes like in a period drama. I am not really religious but I still feel blessed!”