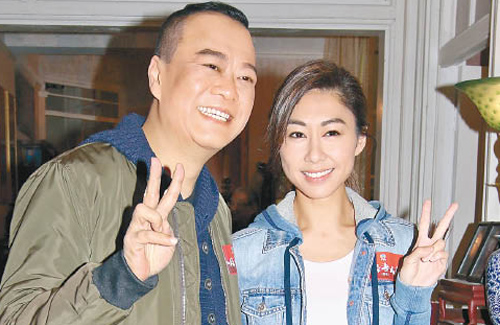 At the blessing ceremony for House of Spirits <一屋老友記>, Bobby Au Yeung (歐陽震華) and Nancy Wu (胡定欣) recalled the memorable moments of the recently concluded TVB Anniversary Awards. Bobby even joked that he was Nancy’s good luck charm in helping her win TV Queen this year.

Re-watching the awards ceremony footage, Nancy could not help but laugh at her own acceptance speech. Nancy expressed, “I received a lot of congratulatory messages. When I watched the video of the awards show and saw how silly I looked on stage, I got teary-eyed.”

Asked how her music producer boyfriend Terry Chan (陳明道) reacted, Nancy said, “He was very happy and touched. I originally wanted to treat him to dinner, but he secretly went to pay for the meal when we were done. I don’t have any thoughts on marriage yet, but I plan to work even harder in filming series. Besides, doesn’t winning an award typically mean not getting married yet?”

While Bobby continued to joke about how his female co-stars receive good luck, Nancy agreed with his comments. Nancy revealed, “When I was still filming Ghost of Relativity <鬼同你OT>, I wasn’t feeling particularly well. One night, I bumped into Bobby and he told me that I should continue working hard . He said that the next few years will be mine. I think he meant that I’d be able to accomplish a lot these upcoming years. And coincidentally when I started working with him in Housef of Spirits, I won an award! He’s very auspicious.”