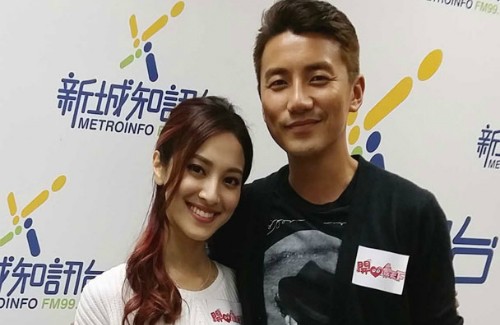 With the current broadcast of new TVB series, Captain of Destiny <張保仔>, main leads Tony Hung (洪永城) and Grace Chan (陳凱琳) accepted an interview during a promotional function. Its premiere episode on Monday, September 21, received an average viewership rating of 25 points, which is deemed quite high by recent standards.

However, reporters pointed out that Tony only appeared for two seconds near the end of the first episode. He expressed, “I know the average was 25 points, but I heard from public relations that the two seconds I appeared in reached 27 points – the peak of the episode!”

Speaking of speculations that there is discord between Tony and his costar Ruco Chan (陳展鵬), Tony denied and exclaimed, “Discord? Nope, I see him as my elder brother. We didn’t have any big issues with each other. Of course I would like to work hard and learn more in TVB. The station has many talented actors, and they have provided me with many opportunities. Raymond Wong (黃浩然) was unable to take part in Captain of Destiny, so I took over his role. I see it as a gift!”

On the other hand, Grace admitted she had a difficult time filming her crossfire scene. She shared, “I’m small and thin in figure, but the equipment was really heavy. It was like a form of exercise!” When asked if her boyfriend Kevin Cheng (鄭嘉穎) was heartbroken to see her so tired out, Grace remarked, “I don’t think he watched the scene yet. Last night, I returned home at 3:00a.m. from work and my dad was still awake. He told me to watch the scene with him, and put his arm on my shoulder as if he was telling me ‘you have worked hard!’ My dad is really sweet!”