“This role is definitely going to be challenging,” said Ali when introducing her role. “I will have to convince the audience that I’m a robot, yet I also have to be very genuinely human. There’s going to be a lot of micro things that I have do well in. To me, this is a huge challenge.”

Ali was excited when she first received the script, praising the story’s uniqueness and fresh cast of characters. “That’s what I want to do as an actor. To be able to have more opportunities to play roles I’ve never played before. After reading the script, I do feel that the story is very complete, and I want to do my best.” 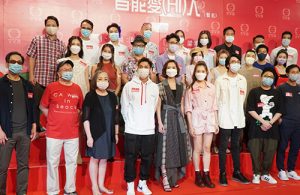 Although fresh from the critical success of TVB’s Death By Zero <殺手>, which ended earlier this month, Ali doesn’t want to place too many hopes and expectations on AI Lover. “I want to do well, but I will not give myself too many expectations,” she said. “There’s going to be many firsts for me. It’ll be my first time playing a robot. It’ll also my first time working with a different team.”

The production staff of AI Rhapsody will be commissioned, thus most—if not all—scenes will be shot at different locations. “We’ll be working regular 12 to 14 hour days,” she said. “There will be more time for us to rest.”

As for returning to the camera for the first time in a year, Ali said, “I have to readjust my mindset back into acting, because I’ve recently just released a book and that’s all I could think about. Usually I’m very too myself, but now that I’m back, I want to reach out to more people. I want to get back into the rhythm of things.” 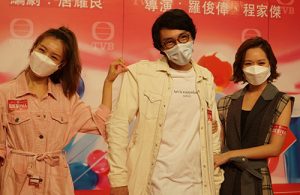 AI Rhapsody will also be Ali’s first drama together as a couple with Billy Luk, who is the drama’s “male lead.” Billy doesn’t want to consider himself as the lead, saying, “This drama only has female leads, and that lead is Ali. The male characters are all here to support her. The story gets really farfetched, because her and Crystal eventually fight over me. I won’t be in the scenes with them. The story is still very much about them.”

From his debut as a FAMA (農夫) member in 2002 till now, Billy’s role in AI Lover is by far the most heavy. He clarified, “Whether it’s a supporting character or not, I always treat it as a main character. I don’t want to play favorites. I’ll do my best in every role.”

He shared that he actually had to do a double take when he first read the synopsis of his character. “The description said he was a good looking man. I had so many questions! Definitely not good looking, but I can see myself in his other qualities.”