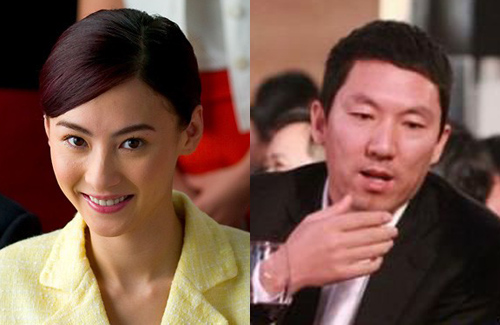 Sun’s diversified businesses also include fashion, real estate investment, science and technology, education and culture. It was reported that he generously gifted Cecilia with a 60 million RMB house near the Beijing airport, to allow Cecilia to have a comfortable place to stay during her trips to China.

In late January, mainland paparazzi followed Cecilia to Beijing, where she attended a celebrity event. Cecilia left the party earlier than expected, going straight to Sun Donghai’s mansion.The paparazzi camped out at the mansion for several days, and saw Cecilia and Sun going back to the mansion together several times. On one occasion, Cecilia brought a large pack of red wine to the mansion.  Sun was seen with his hand around her waist.

Sun once dated Chinese actresses Li Xiaoran (李小冉), who was rumored to be the reason he divorced his wife. Sun and Li Xiaoran went their separate ways after Li Xiaoran began dating young director Yan Po (鄢頗). In 2010, Yan Po was stabbed by four men and sustained serious injuries. One of the suspects claimed that he was a good friend of Sun, and said that he felt sorry for his friend. After breaking up with Li Xiaoran, Sun briefly dated Chinese actress Yin Tao (殷桃).

According to various reports, Sun and Cecilia met through Nicholas’ father, Patrick Tse(謝賢), many years ago. Sun is very close to the Tse family, and Nicholas refers to him as “uncle”.