“It’s not just about me anymore. Now I have two more little beings with me, and I have to be responsible. I am not the center of my life anymore,” Cecilia said.

Cecilia is currently living in a 3,000-feet, four-bedroom house that she purchased for $400,000 CAD years ago. Located in Surrey, British Columbia, the neighborhood she resides in also has easy access to various local recreational centers. Last month, Cecilia and Lucas were spotted swimming in the Surrey Sport & Leisure Centre. Last week, Cecilia was also seen taking her two sons to a dim sum restaurant.

An insider said, “Cecilia has been thinking about immigrating to Vancouver for years. Her half-sister lives there, which was one of the reasons why Cecilia chose Vancouver. Cecilia wasn’t very concerned about estate prices, because they wouldn’t be really expensive there. Her only condition was that she would not live in Richmond, because there are many Chinese living there. She didn’t want to be recognized.”

It was reported Koreans and Indians primarily lived around Cecilia’s current neighborhood.

Cecilia had a thorough discussion with her ex-husband, Nicholas Tse (謝霆鋒), before making the decision.

The insider spilled, “Cecilia told Nicholas the reason why she wanted to move. It was so their two sons can live new lives. Children have strong adaptation skills. The earlier they immigrated, the better. Nicholas grew up in Vancouver himself, and also believed that studying [education] there is not as stressful as studying in Hong Kong. He really didn’t have the heart to see them leave, but Cecilia was firm on her decision. He had no choice but to agree. Besides, as soon as the kids were born, Nicholas had been working on getting them Canadian citizenship in case of later need. Nicholas didn’t agree to it immediately though; he didn’t want to alarm his parents.”

Lucas will begin school next week at Walnut Road Elementary School, enrolling in first grade. Cecilia is currently searching for a suitable preschool for Quintus. The boys were photographed on several occasions with their nanny.

After strengthening her beliefs in Christianity recently, Cecilia found solace in religion. She regularly attends the Evangelical Chinese Bible Church, in Burnaby, British Columbia although it is located one hour away from her hometown. 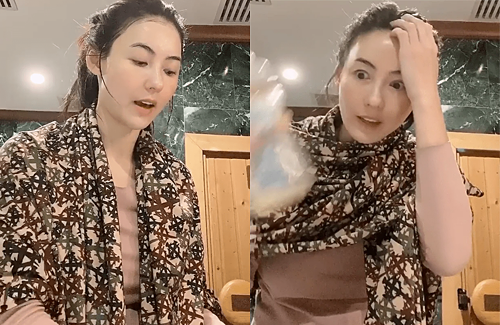