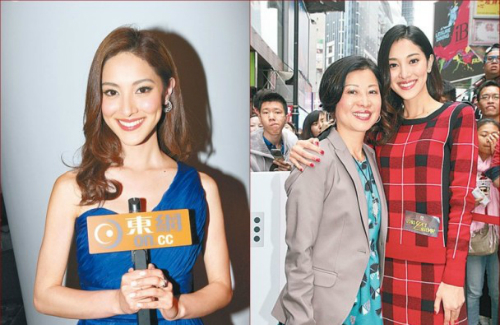 Winner of the 2014 Miss Chinese International Pageant and now an actress at TVB, Grace Chan is most grateful for her mother’s continuous support and motivation. She assuredly expressed, “Of course the person I love most is my mom! She has always been very supportive and encouraging. Although there were many reports on me lately, she told me to take things easily every time. I am really thankful for her!”

Supermodels Marie Zhuge and Sophia Kao both expressed that their most beloved family member is their child. Marie spoke of her one year-old son, Arthur, “He is extremely cute and gives me sweet kisses all the time.” She added that her mother is just as important, since she now fully understands the importance of the role. Meanwhile, Sophia shared that her 10 year-old daughter brought a lot of happiness to her life.

Elva Ni, who was the winner of the 2005 Miss Chinese Toronto Pageant and is now also a model, shared that she loves her mother and younger twin sister the most. “They are the most important people in my life. My mom took care of us since we were kids and have always been a role model. I admire her a lot! My twin sister and I were born a minute apart. We go everywhere together, and have no secrets between us. I only feel complete when she’s with me.”

Veteran actress Kara Hui shared that she loves her younger sister, Sandy, the most. “We took every step together, and faced hardships along the way. She is my other hand, and chicken soup for the soul. During the year of the 29th Hong Kong Film Awards, she knew I faced a lot of pressure. She was at my side the whole time that year until I received Best Film Actress. I saw how touched and pleased she was to see that her elder sister was able to get back on her toes!”

Crystal Cheung and Joyce Cheng both expressed that they love their grandmother the most. Crystal shared, “She took care of me since childhood when my parents had work. She showered me with a lot of love, but sadly she has passed away already. I hope to meet her in my next life and love her back just as much.” Joyce’s grandmother has also passed away, and she expressed, “She was a very petite person, but she could make a table full of dishes for several people!”

Singer Sukie Chung shared she loves her elder sister Sherman Chung (鍾舒漫) the most. “She cooks breakfast and dinner for me, and takes care of me all the time, such as telling me to go shower. She’s like a mother to me, and even picks up the clothes in my room! I’m so grateful to have such an awesome elder sister!”