By misschina on September 7, 2010 in Celebrity "Twins", NEWS 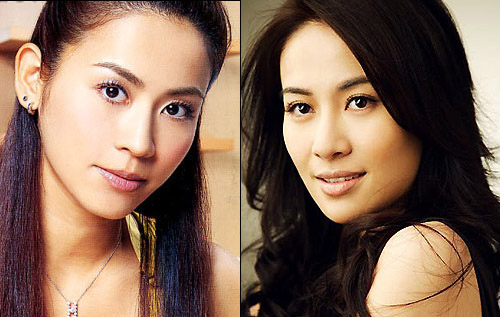 Celebrities are most often praised not only for their talents and personalities but also for their unique and extraordinary looks. However if you take a closer look you will realize that, just like us, many of them do look like each other or at least share some very similar features.

Forty-year-old actress, Jessica Hsuan, who has starred in many popular TVB shows, including Sisters of Pearl <掌上明珠> and A Pillow Case of Mystery II <施公奇案>, bears an uncunning reseblance to thirty-year-old actress Michelle Ye, who is currently working on the much anticipated movie Bruce Lee, My Brother with Aarif Lee and Jennifer Tse.

Both Jessica and Michelle have identical big round eyes and similar noses. They both have the same skin color and they even have similar face bone structure. Due to her younger age, Michelle’s face looks brighter and more fresh, while Michelle’s lips are fuller and smaller than Jessica’s lips. In addition to looking like Michelle Ye, Jessica Hsuan also bears a reseblance to the forty-year-old golden Hong Kong singer, Faye Wong. Even though they do not really share identical facial features, Jessica used to resemble Faye, especially at the beginning of her career when she still had short straight hair. Their eyes also look quite similar, while they are both tall and close at age. Apart from their physical resemblance, Faye and Jessica were both born in August, have the same bloodtype (O), have the same star sign (Leo) and are both 1.71 cm tall.

Miss China: Please try to comment only on the above look-alike pairs. You will be able to comment on other pairs in the upcoming articles.