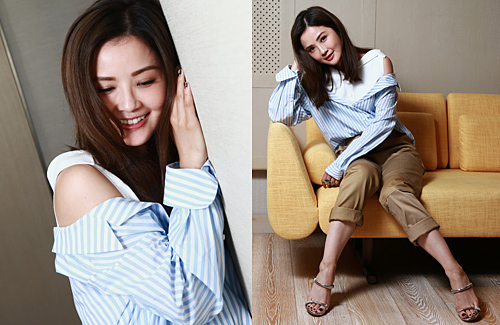 In The Lady Improper <非分熟女>, Charlene Choi (蔡卓妍) portrays a character who suffers from a failed marriage, but her life turns around when she meets a chef (portrayed by Chris Wu 吳慷仁). Though the two have a provocative scene in the kitchen, their professionalism and chemistry made the filming easier.

When asked what her thoughts were of Chris and their provocative scenes, she responded, “He is such a hard working actor who puts so much heart into each character he plays. I really respect him. We have been filming for a month and I have only taken a one-day break in hopes of preparing the perfect shot. The kitchen is very squishy and smelly, but I have to act through it. The workers have already provided all the necessary protection and safety needed for filming so even if he touches me, I won’t feel anything. We won’t be embarrassed because we just want to successfully finish it in one take!”

This is not the first time Charlene has filmed a provocative scene. She also had some revealing shots with Simon Yam (任達華) in Sara <雛妓>. She admitted, “I didn’t want to film something provocative in such a close period of time, but the director requested those shots. It is really hard in the Chinese culture, so the director used a lot of time to edit the script.” Due to her role, many viewers seemed unable to accept the departure from her pure image after watching Sara. She became self-conscious and was bothered by others’ reactions. However, she was able to recover positively and now sees it as a growing opportunity. Her biggest focus is on improving her work.

Though full nudity wasn’t shown, Charlene was asked whether or not she would let her boyfriend, Anthony Shi (石恆聰), watch the movie. She answered, “He watches a lot of movies, so why wouldn’t he? Maybe not the premiere though because there will be too many reporters. We come from two very different worlds. I just want a simple and quiet space and he can match my needs.”

The Lady Improper may help Charlene could win Best Actress but she responded humbly, “Let’s leave it to fate. Watching my growth in the industry is what I find rewarding. When I was little, a lot of my friends wanted to become Miss Hong Kong, but I just wanted to be a good actress since I was three years old.”