Charlene Choi (蔡卓妍) and “mahjong prince” Anthony Shek (石恒聰) have been dating since 2017, and while the couple are in a steady relationship, Hong Kong media is reporting that they have no intentions—yet—of getting married in the near future, even though they now live together.

For the past few times that Ah Sa has been caught by the media, she was seen coming in and out of a Kowloon Tong estate that Anthony also apparently lives in. According to reports, Anthony moved out of his parent’s HK$300 million home due to renovations. He decided to use this chance to also move in with Charlene, kickstarting a new stage in his life. 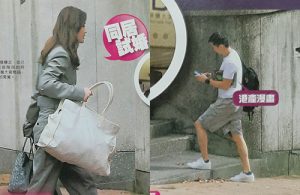 Hong Kong media reports that Anthony lives a modest life, despite his great wealth. Like many Hong Kong youths, he would carry a backpack, a water bottle, and a few comic books to read.

Despite their steady relationship, it’s been reported that the couple do not have intentions to get married. Ah Sa revealed in an earlier interview that her past failed marriage has led her to become more careful in her decisions. For this reason, Ah Sa made the decision to freeze her eggs—26 of them—if her life leads her to having kids later in life. It was reported that Ah Sa spent over HK$200,000 to get her eggs frozen, also known as mature oocyte cryopreservation.

Prior to dating Anthony, Charlene had been in two known relationship: her first relationship was with Ronald Cheng (鄭中基), her husband from 2006 to 2010. She then dated William Chan (陳偉霆) from 2010 to 2015.

Charlene encouraged her boyfriend, Anthony Shek, to change his frivolous ways and concentrate on building up his own career beyond his family’s riches.

Charlene Choi denies breaking up with her boyfriend of three years.