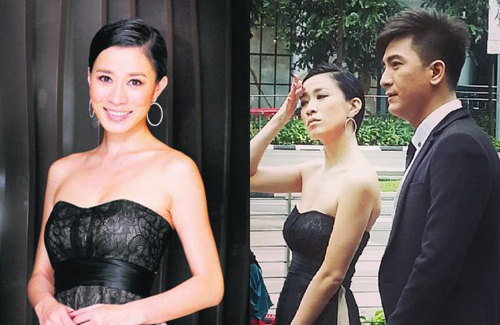 Filming for new TVB mini series, Time of Love <愛情來臨的時候>, is well underway in its respective countries. Earlier, Kenneth Ma (馬國明) and Charmaine Sheh (佘詩曼) were busy shooting their scenes in Singapore, collaborating onscreen for the first time. Both hope viewers will enjoy their fresh spark of chemistry as a couple.

Kenneth’s role was originally intended for Raymond Lam (林峯), but Raymond reportedly was unhappy about being unable to work with artists from other countries, and was thus dropped from the cast. Kenneth did not appear dissatisfied about being a replacement, and was excited in working with Charmaine, who was also content with the new arrangements.

In the series, Charmaine portrays the seductive boss, wearing tube dresses and revealing tank tops in each scene. According to tabloids, Charmaine lingered close around Kenneth off-screen as well, but Kenneth did not seem to show any affection for her. Instead, he occasionally expressed his natural dazed look.

Reportedly displeased with Kenneth’s reactions, Charmaine seemed to be in a bad mood and constantly made angry remarks at those around her. Kenneth appeared to be scared of Charmaine and remained distant, associating with his assistant for most of the time instead. However, after filming a sweet scene of riding bikes together, Charmaine seemed to be in a much happier mood and opened up to Kenneth off-screen. Allegedly, she was pleased by the gentlemen behavior he displayed.

Kenneth Ma: “We Expected These Reports!”

When Kenneth was questioned about the tabloids, he laughed them off and revealed trying to guess the titles of the reports with Charmaine earlier. “She really guessed them correctly! We were aware of reporters while filming, and knew we were going to be on the covers!” Kenneth further praised Charmaine for her professional acting skills on set, and revealed she has largely recovered from her herniated disc condition.