Charmaine Sheh Has One TVB Drama Left in Her Contract 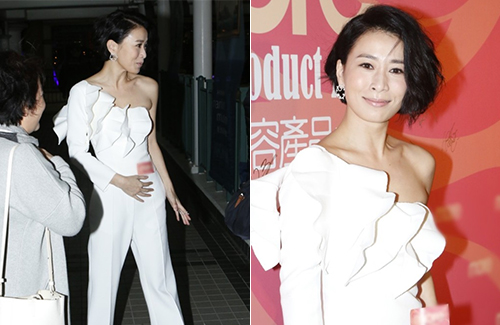 Charmaine Sheh (佘詩曼) still has one TVB drama left in her contract and she’s waiting for the right opportunity to do it.

Yesterday, the 41-year-old actress attended an event wearing a white, one-piece evening suit. The wind was stronger than usual, and Charmaine joked about her hair looking like a mess.

Recently, Hong Kong netizens voted the dramas Line Walker <使徒行者> and When Heaven Burns <天與地> as one of TVB’s most classic dramas in recent years. Charmaine has starred in both of them. The actress, who left TVB in 2011 and is now managed by her own production studio, said she’s very happy with her dramas’ successes. “I’m very happy! I myself really like these two dramas as well. Charmaine then revealed that she has one TVB drama left in her contract, and that she’s waiting for a suitable role or script.

In March, Charmaine will start the filming of her new movie with Dayo Wong (黃子華). The film, a spy comedy, is written by Dayo himself. Charmaine has not worked with Dayo since the 2009 TVB drama You’re Hired <絕代商驕>, and looks forward to the collaboration. “It’s been seven years,” said Charmaine. “There’s pressure [in leading a movie] but it’s like that with any other job too. I will do my best.”

In regards to the news that Kenneth Ma (馬國明) filmed for 27.5 hours straight for TVB’s Deep in the Realm of Conscience <深宮計>, Charmaine said, “That’s common. This isn’t something that only happens with dramas, but for movies too. When you get good results, you’ll forget about the difficulty you went through.”