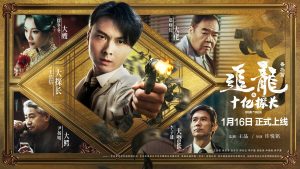 On January 16th, director Wong Jing (王晶) will drop his third film related to the project—the web film Chasing the Dragon <追龍番外篇之十億探長>, which is a spiritual prequel to the 2017 film. The prequel stars Vincent Wong (王浩信) as a younger Lee Rock, who was played by Andy Lau in the 2017 film.

As the film will not be an accurate portrayal of Lee Rock, who is a real detective sergeant who served in the Hong Kong police force from 1940 to 1968, Lee Rock’s name has been renamed to “Tsui Rock.” The prequel centers on Tsui Rock’s road to corruption, going from a kind and justice-searching young cadet to a man corrupted by money.

Chasing the Dragon will be released on iQIYI on January 16, 2020.