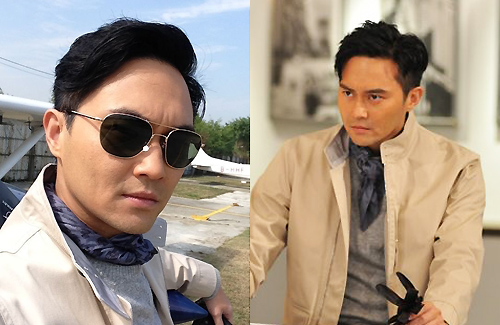 Since Triumph in the Skies 2 <衝上雲霄II> premiered last week, Chilam Cheung (張智霖) has delighted viewers with his role as Captain Cool. While Chilam is well loved for his handsomeness, his popularity took an even bigger step with his portrayal of the playboy pilot. Women fawned over him, while men fantasized being him.

Online discussion forums collected Jayden’s golden lines from the series. They include the popular quotes: “I like showing up exactly on time because I can’t stand being around you losers for more than a second,” and “Women are God’s wonderful creations. They are irreplaceable and nothing on this planet can ever measure up. They are magnificent artworks that deserve appreciation.” Jayden’s catchy phrases caught viewers’ attention.

Lady Killer From the Start

Chilam managed to steal the hearts of audience members with his role in Return of the Cuckoo <十月初五的月光>, and Point of No Return <西關大少>. Even ten years later, his popularity has not died down. Chilam was also offered a role in the original Triumph in the Skies, but decided to film Point of No Return instead. Chilam said he was confident in his all of his decisions and people should not be too caught up in what-if scenarios. It may be fate that he would actually star in the sequel a decade later.

Despite his onscreen playboy image, Chilam is actually a loving husband to wife Anita Yuen (袁詠儀), and a devoted father to their son, Morton Cheung (張慕童). Although he and Anita are both actors, they rarely receive negative publicity because they keep their relationship away from the public. Chilam, does however, bring Morton to the studios and often watches his own series with his son – demonstrating that he could be cool on screen, and off.

Despite his handsome looks, it is the first time Chilam has to take on this type of playboy role. “It’s a big challenge since I haven’t taken on this type of role before. It definitely gives the audience members a different side of me; I’m trying to see how much they’re still willing to accept me after this!” Challenges aside, he jokingly admitted that many male viewers would love to be Jayden, or superheroes like Iron Man who has the money and the girls.

When asked if his womanizer role was based on what he unconsciously wanted, Chilam laughed, “Who doesn’t? I’ll like to be him too! He starts off as the ultra cool pilot with girls flocking to him but in reality, he is just vulnerable and empty. In the end, he finds true love. It’s truly envious.” Since his portrayal as a playboy is in direct contrast of Francis Ng’s (吳鎮宇) role as pilot Sam Tong, Chilam believes that the drama will be that much more exciting to follow.

Chilam was a bit embarrassed when asked about the storyline in Triumph in the Skies 2. With many romantic scenes with Fala Chen (陳法拉), Chilam leaked that there will be a romantic but mysterious upcoming scene that will heighten the intensity of the plot.