By jayne on November 14, 2012 in Celebrity Weddings, NEWS 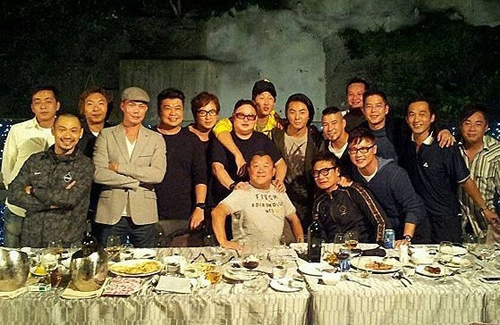 TVB artists, Chin Kar Lok (錢嘉樂) and Angela Tong (湯盈盈), will be holding their wedding banquet tomorrow. They celebrated elatedly with their friends respectively. Currently pregnant, Angela met with her good sisters for a spa evening, while Chin Kar Lok tore off his clothes and went skinny dipping in a swimming pool with his best buddies!

Since all the men were drunk, the party escalated to a wild moment when Eric Tsang ripped off his clothes and underwear and plunged into the swimming pool. One after another, all the men followed Eric’s suit, even the waiter who attended to the party!

“The most drunk in the group was Kar Lok! He is truly very happy,” director Wilson Chin revealed. Asked if the men went too far in wasting away Kar Lok, Wilson said, “There’s only a bit of him left!”

Michael Tse looked forward to playing in the wedding games the next day. Asked if Kar Lok had requested his friends to spare him and not go too far in the games, Michael said, “Why would he say that? He’s afraid we’re not crazy enough. He and Angela are very playful, but she has a [belly] blocking her!”

Reporters contacted Angela and asked if she and Kar Lok were intimate on their wedding night after their ceremony on November 13. Angela said they were too busy preparing for their upcoming banquet and going out with their friends to do nothing more than simply sleep.

Asked to comment on Kar Lok’s wild pool party antics, Angela said that he had sent her text messages while there. “Wilson Chin told me they brought 30 women to the party and after that all the men delivered high-pitched voices, pretending to be women!”