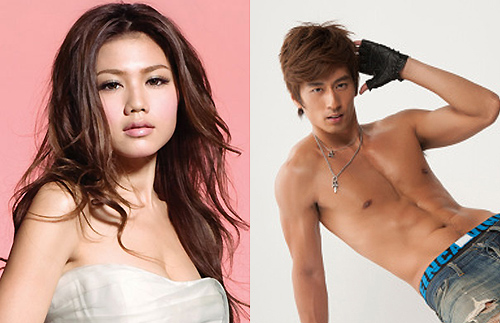 Hong Kong model-actress Chrissie Chau (周秀娜) announced on Sunday that she and her boyfriend of six years, Avis Chan (陳偉成), have broken up. The 27-year-old goddess and her hair stylist ex-boyfriend began dating not long after Chrissie officially entered the entertainment circle in 2006. Chrissie also did not hesitate to make her relationship public at the time, crushing many fanboys’ hearts.

The handsome Avis also found fame in the industry when his relationship with Chrissie went public. The 29-year-old, who owns three parlor shops in Hong Kong, shot to celebrity status overnight. He made his acting debut in the 2012 film, Lan Kwai Fong 2 <喜愛夜蒲2>, starring opposite Mia Chan (陳靜儀). Having to share many intimate scenes in the film, rumors developed quickly between the steamy onscreen couple. Both parties denied the alleged relationship, but Chrissie was reported to have been furious with the rumors. Yesterday, Apple Daily disclosed that the flirtatious Avis had been cheating on Chrissie with 19-year-old model,Vivian Law (羅彩玲) for more than two months. Avis and Vivian met through a mutual friend after attending a party together in Central, Hong Kong. Sparks flew immediately, and for the next two months, Avis would secretly meet up with Vivian whenever Chrissie was not around in Hong Kong. Vivian was also photographed spending the night at Avis’ Ma On Shan home.

At RTHK’s 35th Top Ten Chinese Gold Song Awards on Sunday, Chrissie finally announced her break-up with Avis. On Monday, an intimate photo of Avis sleeping on Vivian’s shoulder was found on Vivian’s Facebook. The press was unable to contact Avis and Vivian regarding the photo, but on Monday night, Vivian deleted the photo from her Facebook page.

Asked if Chrissie knew who Vivian was in a follow-up interview yesterday, she sourly said, “I don’t know. There is no right or wrong in a relationship. Our break-up was not because of others. I don’t know want to get others involved. Our biggest problem was the lack of communication. It was a peaceful breakup.” Asked if there would be a chance for reconciliation in the future, Chrissie responded, “I don’t know. No one knows what will happen in the future.”

Chrissie admitted that she and Avis have not contacted each other after their breakup. She expressed that she is currently focused on her work.

Chrissie also denied that her recent weight loss was because of Avis. She quickly said, “I have been practicing a lot of kung fu.”

28 comments to Chrissie Chau Breaks Up with Cheating Boyfriend