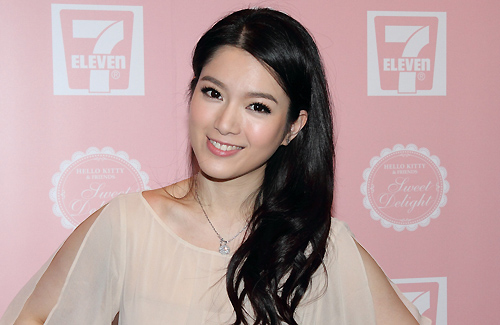 Over the past year, Christine Kuo (苟芸慧) has constantly been the subject of dating gossip. Dubbed as the third party in Lynn Hung (熊黛林) and Aaron Kwok’s (郭富城) breakup, she earlier faced enormous pressure. This negativity built up as recent tabloids stated Christine intervened in Oscar Leung (梁烈唯) and his girlfriend’s relationship. Feeling helpless, she allegedly underwent a breakdown that took a toll on her health.

Weighing 115 pounds when she first entered the entertainment industry, Christine was never considered to be skinny by Hong Kong standards. After filming all day and night for TVB, as well as facing media pressure, her weight eventually increased to 150 pounds. Along with this, Christine developed endocrine disorders and suffered from insomnia.

Christine’s career has been affected by her weight gain, as she lost opportunities to film for advertisements. Currently, she is desperately trying to lose weight by going on a diet, working out at the gym, doing yoga, and eating traditional Chinese medicine. Unfortunately, the process of losing weight is slow, and at times, it would even backfire. Christine’s weight still hovers between 130 to 140 pounds.

Oscar Leung told the press that Christine is a happy girl, and showed no signs of depression.  In terms of the rumored intervention between his relationship with girlfriend, Tina, Oscar expressed, “What’s the big deal? It’s best to be rumored with me, because everyone knows it’s false!”

Christine’s good friend, Grace Wong (王君馨), revealed, “I know she has been visiting the doctor to condition her health. Everyone provided her with many suggestions. Some people told her to work out at the gym or get detoxified. The most important thing is to find a suitable way for her body. She has been working very hard to lose weight. I’ve seen her eat very little. However, it’s different for everyone, because some people become fat just by drinking water. I will pray for her.”

Eliza Sam (岑麗香), another one of Christine’s good friends, expressed, “I haven’t seen her in a long time, since I’ve been busy filming Mr. and Mrs. Bean <貓屎媽媽>. But I have been praying for her health.”

34 comments to Christine Kuo Dubbed as the New “Boyfriend Stealer”