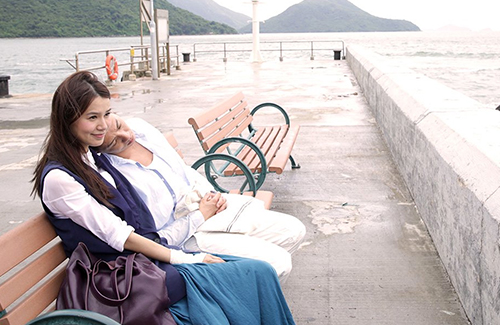 It has been two weeks since the premiere of Come Home Love 2 <愛．回家>, and it’s not getting as much netizen love as one would expect. With a complete change in characters and plot, many fans of the original Come Home Love series have lost interest to continue the sitcom.

Although the sitcom spin-off received many disappointing reactions, Come Home Love 2 producer Lo Jan Ok (羅鎮岳) said he is confident that the audience will eventually accept the new series with a warm heart. “The Ma family are old friends. Now, it’s time to introduce some new friends to everybody.”

“Sometimes, netizens’ criticisms on the drama don’t even make sense,” said chief scriptwriter Tsui. “If the argument is logical, then it is a good thing because that would make us reflect and improve. If it’s just a ridiculous complaint, then all we can do is laugh it off. We shouldn’t get upset over something that is not worthwhile.”

Producer Lo said, “When I enter a movie theater as an audience member, regardless of how big the film production is, I am allowed to exit that theater with many vulgar complaints. Not all productions will be liked by everyone. As a producer, I do not mind criticism. Before we start a production, we will always hold a meeting where we read online comments together. I hope those who criticize these productions only started criticizing after they watched the whole thing.”

Former TVB chief scriptwriter Poon Man Hung (潘漫紅) criticized that many scriptwriters under TVB lacked creative control. They are often restrained by the demands of the producers, and writers are encouraged to not step over their line of framework. After crossing over to HKTV, Poon was allowed much more room for her own creative thoughts, which inspired her to write the drama The Menu <導火新聞線>, a drama about the newspaper industry.

Asked if it was true that TVB scriptwriters have limited control in the creative process, chief scriptwriter Tong explained, “Chief scriptwriters plan the topics discussed in dramas for the upcoming year. We then all get together in a workshop to discuss and brainstorm some more. The company requires diversity in dramas every year, and we cannot have our topics clash. We hold many meetings, and after the producer makes the decision, the chief scriptwriters will discuss the series’ details with the producer. We actually have a lot of creative freedom; it’s just that everything is planned beforehand.”

Tong added that she finds it unfair for many writers when their dramas get criticized for plagiarizing other television series. “We want to create something that is relatable to society, and that’s why there are similarities with foreign dramas. They just manage to write about the topic before us! As scriptwriters, we are just using drama as a tool to reflect what’s happening in society. Some scriptwriters can create stories that can inspire the audience. So should scriptwriters write stories according to what people already love, or should scriptwriters write stories that would make people love?”

The Benefits of Hong Kong Sitcoms

When it comes to writing a hundred-episode long sitcom like Come Home Love, the challenge of story-writing is taken to the next level. Not only has the workload increased, scriptwriters are also asked to be a lot more efficient, and are constantly tried by time.

Producer Lo said, “A typical sitcom usually has two chief scriptwriters. We have to come up with five stories within seven days a week. We have three scriptwriters for Come Home Love.”

The three scriptwriters for Come Home Love—Siu, Tsui, and Tong—take turns managing a week’s worth of story output. “It allows us to take turn resting,” said Lo.

Siu, who was the chief scriptwriter for acclaimed series Gilded Chopsticks <食為奴>, agreed with Lo. “The characters in a sitcom are family and friends. You can see them every night, and they’re easily likable.”

Sitcom characters are usually very easy to distinguish and easier for the audience to grasp. In Tong’s opinion, writing a character for a sitcom is much easier than writing for a character in a typical prime-time serial drama, “In a typical 20-episode series, the characters can have many changes, so it’s harder to control them. It’s also much easier to create characters based on the actors for sitcoms. In Come Home Love 2, Ng Yip Kwan’s (吳業坤) character is completely based on himself.”

Tsui, who has worked on well-known dramas such as 1999’s Happy Ever After <金玉滿堂> and Witness to a Prosecution <洗冤錄>, praised the uniqueness of Hong Kong sitcoms, and added that they are incompatible to the sitcoms from other countries. “Foreign sitcoms aim to be funny, while Hong Kong-style sitcoms are more philosophical. They’re completely different.”

Come Home Love 2’s ratings dropped from 25 points in the first week to 21 points in the second week, but Tsui said, “It’s in the nature of a sitcom to take a while before it gains acceptance. That’s why when the sitcom is first released, the ratings are not impressive.”