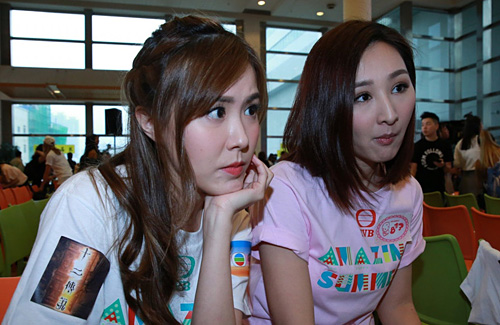 Defending the show, Bob denied the animal cruelty claims, but expressed that they will definitely take viewers’ opinions into consideration for future episodes. Bob also added, “To be honest though, these shows do seem very cruel, but we try to keep the bloody scenes minimal. A lot of the scenes are mainly just of the guest stars’ reactions to the cooking.”

Hoping to clarify some of the confusion, Edwin said there is always a professional backstage to ensure proper treatment of the ingredients, as well as ensuring that the killing of the animals is as painless as possible. Edwin also revealed that the cast and crew pack up the leftover food as takeout to avoid food waste.

Not affected by the negative reception, both Bob and Owen said they are not concerned the show will be removed from the broadcast lineup. Owen smiled, “Of course not, besides the comedic portions, there are some touching moments.”

One of the Cooking Beauties on the show, JW (王灝兒), admitted that the professional chef was the one who helped her cut the fish as she has never done so in real life. TVB has also released a statement saying the production team will be more mindful of the content in the future.