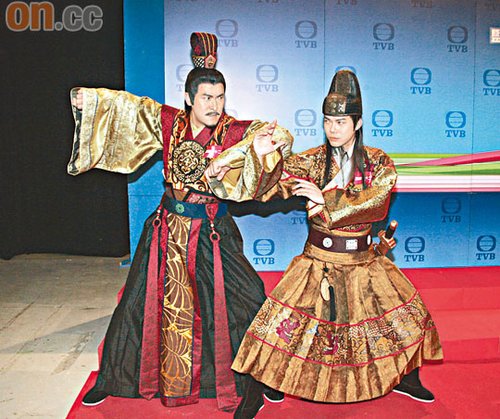 Kate will portray the role of a brothel owner. Due to the transparent material of her costume, Kate’s arms and back were exposed.  Kate revealed that the script for “Hong Wu Thirty-Two” has not been completed yet.  “In the series, I would not have any martial arts sequences. I will probably need to dance in some scenes. Kate’s character will be involved in a love triangle with Joe and Michael. The three actors seem to easily attract negative rumors? “That’s not necessarily a bad thing. That means more people will be noticing this series!”

In response to his love story arc with both Kate and Elanne, Michael said, “I have more scenes with the male actors. I am afraid of rumors; please find someone else for them!”

Acting in an ancient series for the first time, Elanne Kong will play a princess. “At first, I was concerned that my features are too modern to fit the role. But after the costume fitting, the results were okay.” She will be involved romantically with Sammul, Michael, and Benjamin.  Elanne anticipates partnering with Michael, but she is afraid that she will be unable to contain her laughter.

At the costume fitting event, Elanne, Sammul, and Michael took photos of themselves on their cell phones and posted them on their blogs afterwards. Elanne said, “Blogs are very powerful. While flying on an airplane to Shanghai for a work assignment one time, I posted photos on my blog. When the plane landed, the  fans were already waiting at the airport. They read my blog and realized I would be landing at the Shanghai airport on the same day!”

When reporters asked whether Sammul has met with Stephen lately, Sammul responded, “Which Stephen?” (Of course it’s Stephen Chan Chi Wan!) “I did not meet with Stephen; I do not have his phone number since he opened his new company.” Reporters corrected Sammul and said that Stephen’s responsibilities at TVB have halted, but he has not formally left the company yet. Sammul said, “You can tell I am not very familiar with Stephen’s incident! Let’s return to the topic of ‘Hong Wu Thirty-Two.’ The cast is very similar to ‘The Academy.’ We just substituted Ron Ng Cheuk Hei with Joe Ma.”