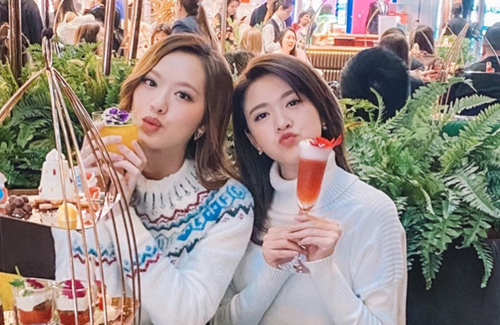 In May this year, news surfaced that Crystal Fung (馮盈盈) and her good friend Kaman Kong (江嘉敏) had joined in a yacht party hosted by Arnaldo Ho (何猷亨), the fourth son of late casino tycoon Stanley Ho (何鴻燊). However, Crystal later clarified that it was Kaman who had invited her, while she alleged that Crystal has “many suitors” and did not need her to introduce any men, hinting that the latter was lying. With each holding on to their version of the story, their friendship was said to have been strained by the incident.

Hints of Friction on Social Media

Kaman had posted online, “Life is like a game of Werewolf–you’ll never know who is telling the truth and who is lying,” saying that it is difficult to see a person’s true character. This led to media speculation that the post hinted at her intensifying fallout with Crystal.

With media reports flipping out conversation text exchanges between the two, it seemed that the truth of the matter was that Crystal had invited Kaman along to the yacht party and not the other way around, as she had insisted. However, both parties denied this afterward.

On Saturday morning, Crystal updated her Instagram feed hoping for an end to the episode, writing, “With regards to public allegations about (my) falseness of character, I have to clarify that I have not done anything like that. Whether in public or private, I have not expressed any opinions or comments regarding reports on Miss Kong and myself previously. This is a baseless rumor which has seriously harmed both of our characters and reputations. A wise man does not believe in rumors–please stop these untrue (rumors) and let the matter come to a closure. Thank you.”

As Kaman did not celebrate Crystal’s recent 26th birthday in June, netizens speculated that the two friends are not as chummy as before.