2016 Miss Hong Kong winner and TVB actress Crystal Fung (馮盈盈) is a recurring character among gossip circles due to her social lifestyle. Rumors claim that the 26-year-old is a social climber, and has been using her time to score good relationships with Hong Kong socialites, such as becoming a “new favorite”of former TVB chairman Charles Chan (陳國強). Now earning good money, it was claimed that Crystal has been using it to buy custom-made luxury bags. She’s also recently moved into a thousand square foot flat in Malibu, of LOHAS Park in Tseung Kwan O with her parents. According to sources, the flat is worth 23 million Hong Kong dollars.

Crystal has never been the type of person to clarify rumors, believing that it is a waste of time. But these rumors have been circulating so fast that the Al Cappuccino <反黑路人甲> actress fears that her image—and now private life—will suffer.

“I’m living in Tseung Kwan O, but not Malibu,” Crystal clarified. “Those reports got it all wrong. I’ve moved back in with my family because I want to be with my mother, who has been suffering heart problems. She’s doing body checks all the time. She’s getting older, with low blood sugar and frequent dizziness. She needs someone to take care of her. Also, I want to clarify that where I’m living now is rented, not purchased. I don’t know why reports are saying that I’ve suddenly gotten wealthy.” 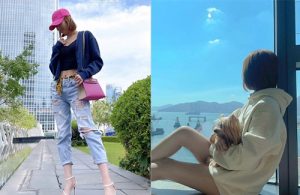 The rumors have started to negatively impact Crystal’s private life. She said her father is very upset with the reports. “The prices on my bags were reported wrong. Since I was 18, my father has been buying bags from this brand as a birthday gift for me. He sees it as an investment. He’s been buying them for me and my mother for years, and my mother and I share the bags.”

Crystal doesn’t find the need to stay more low profile with flaunting her wealth and status, explaining, “I work hard for my money. The things I buy for myself and my mother are from my own paycheck. Why would I hide that? I won’t change myself.”

As for reports claiming that she’s Charles Chan’s new favorite, she said, “He may be my former boss, but we do not contact each other in private. [TVB] has given me a lot of work, and I don’t think it’s because I have good relations with any single person. Two years ago, I extended my contract to another ten years. That’s probably why!”

Crystal’s rumored boyfriend Leonard Cheng (鄭衍峰) has also come to Crystal’s defense. He said, “If you watch our show Young and Restless <後生仔傾吓偈>, then you know that Crystal has talked about her bags. They’re all given to her by her dad, and she’s told us that she lives in Tseung Kwan O with her parents. None of them were secrets.