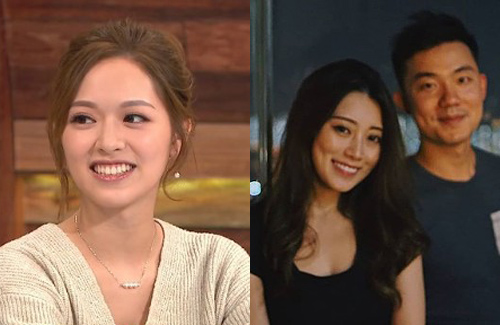 Despite moving in and purchasing a condo together, Crystal Fung (馮盈盈) and her boyfriend of four years, Dr. Martin Chung (鍾文浩), ultimately called it quits last year. Throughout Crystal’s relationship with Martin, she has been frank with the media and even cited the reason that they broke up was because they wanted to focus on their careers respectively. One year after their separation, both Crystal and Martin have moved on to different partners.

During an episode of TVB talk show, Young and Restless <#後生仔傾吓偈>, the hosts conversed about the subject of an ex getting married. Seemingly targeted at her, Crystal slickly approached the subject with humor and lightheartedness. She joked, “They can still divorce after getting married, right? So I don’t think it’s a big deal.”

When asked whether she would attend her ex-boyfriend’s wedding if invited, Crystal responded, “Yes! And I would look my best too! I wouldn’t purposely doll up too much, but I can’t help it [if I am pretty].”

Jokes aside, the subject of Martin’s alleged engagement came up, and Crystal expressed, “Because the news was fake and the rumors were unfounded, I didn’t feel the need to respond or address it. It’s not because I am petty or jealous or bitter.”

Although Martin later clarified that he had not filed for marriage registration, explaining that it was merely coincidence that another person shared the same name, he nevertheless admitted to dating a new girlfriend. Recently, he posted a photo of his girlfriend amid a setting sun and captioned it, “Sunset lover.”

Crystal is also rumored to have moved on and is currently dating Young and Restless co-host, Leonard Cheng (鄭衍峰). Unlike Martin, Crystal has not confirmed the relationship though she admits she is very close with Leonard.