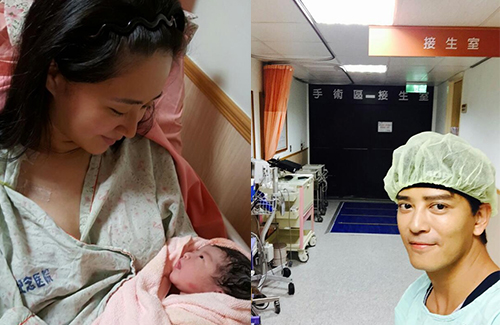 Congratulations! Daniel Chan (陳曉東) announced the birth of his second little princess on Sunday. The actor and singer shared the news to his fans on Weibo, writing, “My little August 15 daughter is here! A leo. Your father and mother will love you. Thank you, everyone. Peace.”

The 39-year-old shared a selfie of himself dressed in a visitor’s gown at a hospital in Taiwan, waiting to enter the delivery room. He also shared a picture of his wife, former model Wang Yu Hsien (王妤嫻), holding the newborn girl in her arms. The baby is looking up at her mother, smiling.

Daniel married Yu Hsien, who is 12 years his junior, in a humble wedding ceremony back in early 2014. That summer, Daniel announced the birth of his first daughter, Kathelyn Chan (陳芷霖). In April 2015, while attending a public event, Daniel revealed that his wife was pregnant again. Yu Hsien was said to be due late August, but their little girl, who was seven and a half pounds at birth, decided to greet the world a few weeks earlier. Daniel and Yu Hsien then flew to Taiwan a few days earlier than planned, and stayed at the same hospital where Yu Hsien delivered Kathelyn.

At the thought of welcoming a new addition to his family, Daniel joked, “I am starting to lose my authority.”

Their second daughter weighed about the same as Kathelyn at birth, but Daniel shared in a later phone interview that their second daughter was slightly longer in length. Daniel revealed that he was in the delivery room and had the privilege to cut her umbilical cord. “I never did this before. I was also in the room when my wife delivered Kathelyn, but this time I actually asked the doctor if I could cut the umbilical cord. I was quite nervous, but I think I did pretty well.”

Daniel has taken a leave from work and will focus on his family for the time being. “I need to get my daughter’s birth certificate and find a master to name her. Afterwards, I will fly back to Hong Kong to apply for an identification card for her. I was offered a few acting and music projects, but I will save that for later. I want to spend more time with my wife during her postpartum period. I will get back to work once she’s recovered well.”