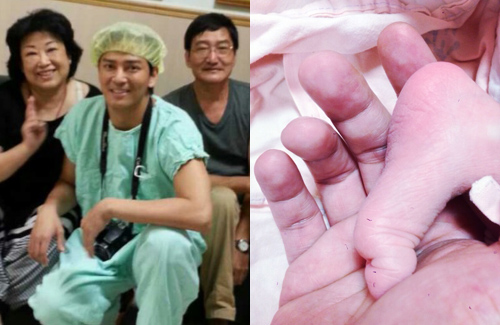 Daniel Chan (陳曉東) proudly announced the birth of his daughter on July 5. He shared his gratitude towards everyone’s concerns and praised his wife, Wang Yuxian (王妤嫻), for being a strong woman. Accompanying the Weibo post was an adorable photograph of the newborn infant’s foot.

Daniel wrote, “I am very pleased today to announce that my daughter is born. She weighs 7 pounds and measures 20 inches. Both the mother and baby are safe. The big one is strong and brave, while the little one is extremely cute. The first day of being a father feels very realistic and it’s hard to describe the happiness. Thanking everyone for the concern and paying tribute to all the mothers in the world for their greatness. Thanks.”

Nervous but excited, Daniel accompanied his wife the entire time at the hospital during the birth of his daughter. His father, mother, younger brother, and younger sister-in-law flew to Hong Kong from different countries around the world to witness the special moment. They eagerly waited outside the delivery room for the good news. Meanwhile, Daniel was right by his wife’s side in order to capture every moment of his daughter’s birth.

Daniel shared, “My wife continuously threw up ever since she became pregnant. She suffered a lot and is extremely brave. She always insisted on giving a natural birth, and has persevered until the end. Before entering the delivery room, she was even smiling and saying how she wants the baby to arrive faster. She is very optimistic!”

The birth procedure went smoothly and the infant was born within five minutes. Daniel expressed that his wife did not scream nor cry throughout the process. According to the doctor, the baby girl is taller than most others and will probably grow up to be a beautiful woman with large eyes. While Daniel thinks the baby resembles his wife, his wife believes she resembles him more. At the moment, the couple has not yet decided on a name for the baby.