Daniel Wu and Kevin Spacey’s “Inseparable” in Theaters on May 4th! 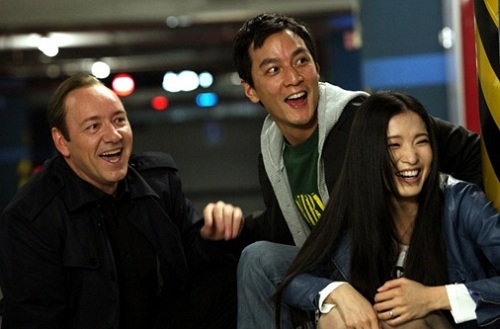 Daniel Wu (吴彦祖) and two-time Oscar winner, Kevin Spacey’s new movie, Inseparable <形影不离>, will be released in theaters in China on Friday, May 4th. Facing incredible stress in his marriage with Gong Beibi (龚蓓苾) and at his engineering job, Daniel Wu, entered his darkest hour and was ready to quit life. Saved by Kevin Spacey, Daniel forged a friendship with the American expatriate, with the duo policing the streets as unlikely superheroes. Riddled with black humor and references to the superhero film genre, Inseparable deconstructed the increasingly stressful lives of professionals in China’s rising metropolises. In the film, Kevin Spacey’s character represented the last sliver of hope in Daniel Wu’s life, appearing in his hour of greatest need. Will Kevin be able to help Daniel collect the remaining shards of his broken life or will he continue to spiral towards an emotional and mental breakdown?

Inseparable was produced, directed, and written by Dayyan Eng (伍仕贤), who was born in Taiwan, educated in the United States, and currently working in mainland China. Inseparable marked the first time an American actor of Kevin Spacey’s visibility appeared in a wholly Chinese-financed movie. At early screenings, Inseparable received positive praise from critics for its clever story and dark humor.

Kevin Spacey was full of praises towards Inseparable costar, Daniel Wu. Kevin said, “He is very serious about his work and does not keep up with appearances. He is also a great dart player! I also like to support new actors; what reason is there not to like him? I believe that good directors in western countries will soon realize that Daniel Wu is one of the most outstanding actors of his generation! Western directors will likely give very good roles to Daniel Wu, who has long been famous in Asia. It is not without reason that he is a big star!” Expressing the desire to film in China again, Kevin Spacey was full of confidence towards the emerging Chinese film market.

As the world’s second largest box office, China offered many untapped opportunities for Hollywood directors and actors. Recent films featuring the partnership of Chinese and American talent include the casting of Christian Bale in director Zhang Yimou’s (張藝謀) The Flowers of War <金陵十三钗> about the Rape of Nanjing, as well as Adrien Brody and Tim Robbins in director Feng Xiaogang’s (冯小刚) 1942 <一九四二>, a film about the widespread Chinese faminine that occurred in 1942.

Jayne: This is only the beginning of the merging of more Chinese and American film talent. As China’s box office increases in commercial strength, there will be more Hollywood stars in Chinese movies and Chinese stars in Hollywood movies. This will be a wave for the future! 🙂

23 comments to Daniel Wu and Kevin Spacey’s “Inseparable” in Theaters on May 4th!