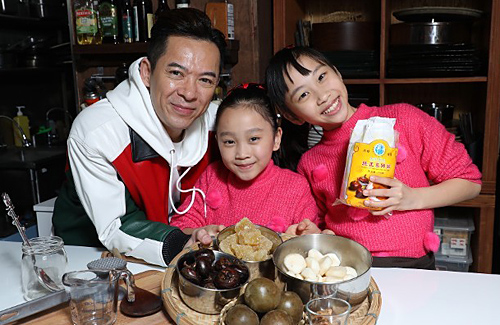 Working at TVB for 30 years in which he has a reputation for his martial arts skills, Derek Kok (郭政鴻) decided to leave the company in 2015 for more flexible work hours. As a father to two daughters, Kaley (倩欣) and Ashley (詠之), he believes that family time is the most important.  Choosing his own jobs, he hopes to spend more time with his two daughters.

With the New Year approaching, Derek and his daughters are hard at work preparing their specialty, monk fruit water chestnut cake.

Derek really looks forward to this time of year as his whole family can reunite for a big dinner and he can spend a lot of quality time with his daughters. He shared, “We have already finished making our cakes, so all that’s left is cleaning to welcome the New Year. We are very traditional, so aside from red packets, we also bought flowers. I really cherish this time of year to be with my daughters.”

Aside from cooking together, the father-daughter trio also enjoy playing tennis together. His daughters know that Derek really loves lion dance and martial arts so every year during New Year; they would do a lion dance together. Derek’s older daughter, Kaley, said, “I love collecting red packets, and I make sure to save them every year.”

3 comments to After Leaving TVB, Derek Kok Spends More Time with His Daughters