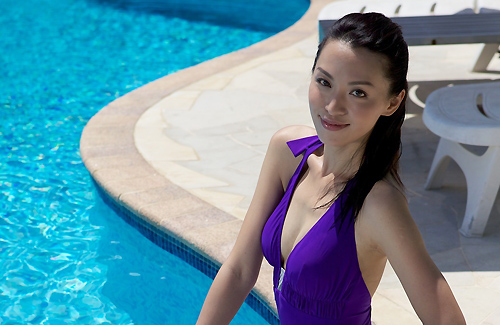 Friendly Fire <法網狙擊> has received much media attention since its broadcast. Aside from intriguing legal cases, the drama boasts an attractive female cast who has been generous in their skin-revealing scenes.

Former ATV actress, Alice Chan, is about to make her big TVB entrance as the chief villainess in Friendly Fire. She portrays the role of a ruthless CEO of a corporation who uses unscrupulous means to exact revenge and get back what once belonged to her family. This includes seducing men to use them as her pawns. To perfect the role of the seductress, Alice added numerous sexy clothing to her wardrobe, including a low-cut purple swimsuit that showcases her figure perfectly.

In her entrance scene where she met up with a few uncles, Alice wore a low-cut body-hugging tube dress. When she sat down, she imitated Sharon Stone in her infamous Basic Instinct scene. Alice revealed, “I find both characters are similar. They are both cool and aggressive. When I suggested emulating that scene to the producer, he agreed.”

Alice will also have several passionate kissing scenes with Derek Kwok  (郭政鴻), one of which will feature Alice wearing a skimpy bikini on board a yacht. Alice shared that she would not prevent her husband from watching the show, because he is a rational man, and is able to discern real life from acting.

Producer Man Wai Hung (文偉鴻) praised, “Alice is very professional and sharp. After I told her the background of the character, she was able to add her own dimension to the role and successfully portrayed the role of the villainess.”

Whenever Grace Wong (王君馨) appears on screen in Friendly Fire, she will be dressed sexily in tight dresses and 4-inches heels, showing off her 34-23-35 figure.

To show off her hourglass body in the drama, Grace had to don a corset and a push-up bra. She moaned, “Because I grew up in America, I am not as slim as Hong Kong girls so I had to go on a diet to lose an inch on my waist. On top of that, I had to wear a corset in the summer, which was stifling.” Her efforts paid off though. Not only did Grace’s character, Moon, set male viewers’ hearts aflutter, female viewers love her too. Apart from her killer figure, Moon is simple-minded and a very likeable character. In the end, she also helped ex-lovers Michael Tse (謝天華) and Tavia Yeung (楊怡) to reconcile.