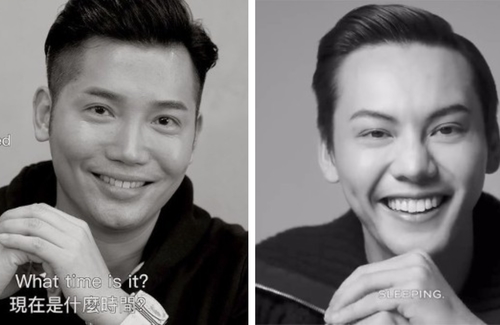 Hong Kong artist Derek Wong (黃建東) has done it again! The actor, who experienced a surge in popularity after his comedic Cantonese version of Japanese song “PPAP” went viral in 2016, returned with another spoof today. This time, he created a parody of William Chan‘s (陳偉霆) new Chanel watch ad.

In the original commercial, William flaunted his English and smiled brightly as he talked about time. While some netizens thought he was charming, others ridiculed his English pronunciation. Despite the mixed response, William was able to create noise for the campaign.

Derek saw the opportunity for a great video and made his own version of the ad. He imitated William and spoke in English, talking about how he debuted in the entertainment industry, and bursting out in laughter at times. Derek sprinkled Cantonese phrases throughout the video, such as, “I ding (microwave) my lunch box,” “I hug my goo ma (aunt),” and “Go yum cha (drink tea) with her.”

Speaking in English was not a challenge for Derek because he previously studied in America. Netizens thought his parody was hilarious and left comments like, “So good, I really like your spoofs! Better than the original” and “I keep replaying it.”

When Derek accepted a phone interview, he said the last time he filmed a parody was two years ago. “I wanted to be an actor, but I realized there weren’t many opportunities for me. In fact, for the past two years, Wong Cho Lam (王祖藍), Grace Wong (王君馨), and others kept on urging me to film videos again. They said my clips are the most valuable, so when I saw that William’s video was quite funny and simple, I made my own version,” Derek revealed.

However, he stressed that he was not making fun of William, and added that filming took six hours.