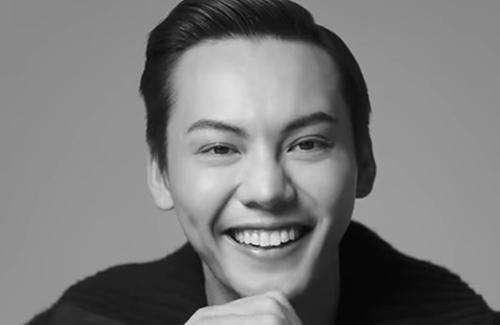 After being criticized for ruining the Mandarin version of the “Aladdin” theme song, William Chan (陳偉霆) is facing criticism again for his disjointed English in a new Chanel advertisement. Netizens ridiculed his exaggerated facial expressions and heavy Chinese accent in his English speech. They suggested William should just speak Chinese instead.

The 33-year-old actor is the only male brand ambassador for the Chanel J12 watch alongside nine other female stars including Naomi Campbell, Keira Knightley, Lily-Rose Depp, Chinese supermodel Liu Wen (劉雯) and more.

In his own 45-second monochrome video ad, William dominated several close-ups with his poses, big smiles, and English speech on how he views time and which moments had changed his life. He talked about how he debuted in the entertainment industry through entering a singing competition at 17 years old because he wanted to try being an artiste. He also mentioned that he wastes his time by sleeping, and hopes to stop time whenever he hugs his mother.

William had studied at Yew Chung International School and even gave up the opportunity to study university abroad in England in the past. Previously, he had uploaded a clip of his nephew and himself having an English conversation. This had netizens believe William has decent ability in English.

However, the stark contrast of his English between his clip and the Chanel ad made netizens question his English capabilities, as they harshly criticized, “Just speak Chinese instead!” and “His laugh is so disgusting.”. Many fans commented in defense of their idol, by praising, “so handsome” and “so charming”.