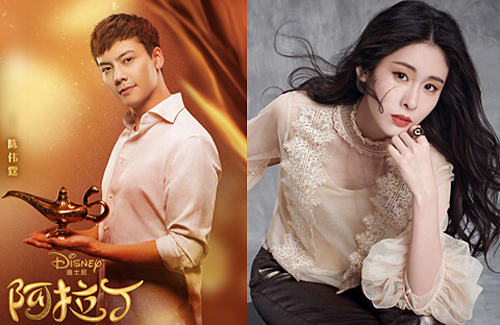 Performing the Mandarin version of the Disney classic, William Chan is criticized for his “unique” singing style.

With the release of Disney classic Aladdin’s live action version, an all-new Mandarin version of “A Whole New World” <新的世界> by William Chan (陳偉霆) and Zhang Bichen (張碧晨) was released.

While Zhang Bichen’s singing has been largely praised, William on the other hand has been lambasted him for his “breathless singing style”. Some felt that he could not do justice to the song and questioned why the song was not delivered by other professional Mainland singers, commenting “Is he so popular that we can overlook his [lack of] singing abilities?”

Zhang Bichen, winner of The Voice of China <中國好聲音> season 3, has long been recognized for her singing abilities, while William Chan rose in popularity from his work in Mainland China in recent years.

William became a singer after joining 2003’s TVB8 International Chinese New Talent Singing Championship <全球華人新秀歌唱大賽>. Before focusing on the Mainland market, he had performed many Cantonese songs, though he failed to impress the local audience who mostly remained unaware of who he is.

Undeterred, William started taking on jobs in China in 2013. Although he played only a supporting role in Swords of Legends <古劍奇譚>, he managed to stand out with his handsome good looks. He also appeared in Legend of Zu Mountain <蜀山戰紀之劍俠傳奇>, The Mystic Nine Tetralogy <老九門> and other dramas which cemented his popularity.

William’s dancing talents and Korean styling kept his popularity rising, with his filming rates rumored to hit 90 million yuan. While his singing of “A Whole New World” faced rampant criticism, loyal fans have spoken up for him amidst the negative press, bringing up his professionalism and gentle delivery of the song.