Dicky Cheung Thanks His TVB Crew 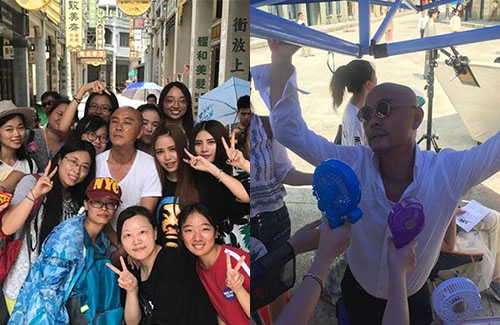 Currently filming TVB’s The Learning Curve of a Warlord <大帥哥>, Dicky Cheung (張衛健) is not in the best of places. The hot summer weather is suffocating, and the long filming hours are giving him a headache. But the 52-year-old actor, who hasn’t filmed a TVB drama in over 20 years, has found ways to cool down.

A while ago, the drama team went to the Xiqiaoshan National Arts Studios in Foshan for principal photography shooting. Performing a blessing ceremony in front of hundreds of staff members, Dicky promised the crew that he would not lose his temper.

Dicky siad, “I’m fortunate to have come across such a caring team. To keep us hydrated, the crew would prepare ice cold green bean soup for us to drink. Our fellow actors have all pitched in to buy a large ice cabinet so we can stock our drinks.”

The Journey to the West <西遊記> star added that the Warlord crew has been very accommodating and caring. They arranged Dicky to live in a room at the end of the hotel hallway, which had thicker walls. Dicky said he was able to sit down in a quiet environment to study his script. He also said the crew were very prepared with their portable fans, saying, “Perhaps because I am bald, but they would all offer me their little fans to help me cool down. Thank you for taking care of me!”

2 comments to Dicky Cheung Thanks His TVB Crew