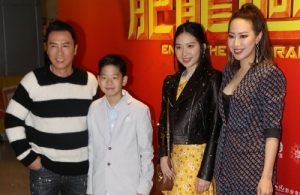 Donnie Yen (甄子丹) recently attended the premiere of his latest Chinese New Year movie, Enter the Fat Dragon <肥龍過江>, alongside director Wong Jing (王晶) and costar Louis Cheung (張繼聰). Many were in attendance to support the film’s release, including Donnie’s wife and kids. However, lead actress Niki Chow (周勵淇), who plays Donnie’s love interest in the movie, was missing in action due to her pregnancy.

When reporters asked Donnie if he congratulated Niki on her pregnancy, the actor said he already guessed she was pregnant a few days ago. Donnie shared, “It’s because she was gagging, so I guessed there must be something and congratulated her then.”

He continued, “Frankly speaking, she didn’t have a partner yet when we started filming, but she got into a relationship soon enough. At that time, I told her to hurry up and settle down and have kids quickly because that’s life’s most important matter.”

Donnie Has No Box Office Pressure

Since a lot of films are going up on the big screen around the same time as Enter the Fat Dragon, there will inevitably be competition. Still, Donnie expressed he is not worried about it. “A film’s success isn’t just determined by one person,” he said. “And what’s important is that people spend the Chinese New Year happily. It’ll be great to see them going to the cinema to support the film.”

This time, Wong Jing did not only direct the movie, but he also acted in it. “There are only two people in this entertainment circle who would tell me to act – Stephen Chow (周星馳) and Donnie!” Wong Jing said.

Donnie added, “Honestly, brother Jing has a lot of acting potential, so he doesn’t need to produce more films!”

As for Donnie’s upcoming work plans, the actor said he’ll be collaborating with director Law Chi-leung (羅志良) on a new art film, in which he will travel to all kinds of scenic places.