Elanne Kong Enters Hospital After Being Kicked By a Horse 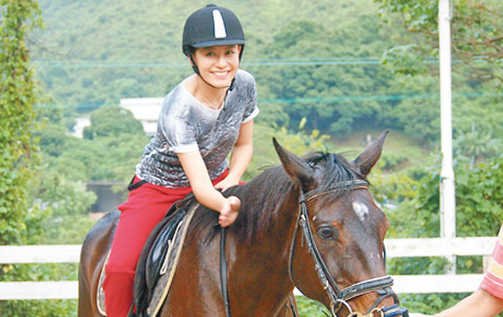 Elanne Kong (江若琳) met with a streak of bad luck recently. While filming earlier, Elanne injured her waist with a dumbell. Yesterday, she suffered from a painful injury after being kicked by a horse while filming in mainlandChina. Her thigh grew immensely swollen and due to the pain, she burst into tears immediately. Accompanied by the production crew, Elanne entered the hospital, upon which the staff advised there were no serious injuries. Elanne resumed filming today.

It was Elanne’s first time working with a horse while filming mainland series, Heroine General <巾幗大將軍>in Dunhuang, China for mainland series. During filming, Elanne stood with her back away from a nearby horse. Without warning, the horse raised its legs and kicked Elanne, resulting in the painful injury.

In a long distance telephone interview, Elanne explained, “It was not a serious injury. There is no need for everyone to be so alarmed. The accident was due to a moment’s inattention, as I did not realize that the horse’s behind was facing me. As a result, the horse kicked me with great force on my thigh, which became immediately swollen. An imprint of the horse’s hoof is still visible!”

While filming earlier, Elanne suffered a waist injury. Asked which injury was more serious, Elanne said the injury this time was more severe. “Production crew members told me that when a horse kicks its hind legs, the resulting force may yield an impact of several hundred pounds! It’s very painful!” Although Elanne tried to bite tears, she was unable to do so due to the immense pain.

After the accident occurred, production crew members immediately accompanied Elanne to the hospital. Fortunately the doctor who examined Elanne noted that it was not a serious injury and that she would recover with three to four days with adequate rest. “The crew was great, allowing me to rest for a full day today. I can go back to work tomorrow; however, my movements will be slower than normal.”

The director of Heroine General posted photos of Elanne’s injury on his blog. Thrown on the ground, Elanne was obviously in pain. No wonder the director praised Elanne for resembling the brave and strong character Fa Mulan, which she portrays in Heroine General. Source: Oriental Daily
Jayne: Hope Elanne is feeling better now and that she has a speedy recovery!