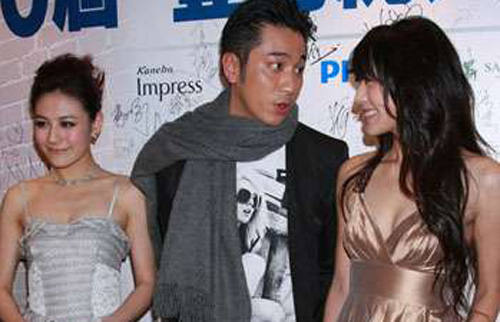 At yesterday’s “Next Magazine 2010 Awards,” Ron Ng Cheuk Hei ran into rumored ex-girlfriend, Ella Koon Yan Na. Although Ron and Ella were once romantically linked, many negative rumors resulted after their relationship ended.  Since Ron’s current rumored flame, Elanne Kong Yeuk Lam, was also at the awards ceremony, reporters asked the trio to pose together for photographs.

Ella won Next Magazine’s “Artist with Full Range of Beauty Award.” Elanne won the “Artist with the Most Potential Award.”

Ella was the most sexily dressed artist at the event. She wore a backless gold dress with a plunging front neckline. When asked which aspect of herself she found to be the most beautiful, Ella said, “My smile because no one will refuse a nice smile.”  Among male artists, Ella found Bosco Wong Chung Chak and Takeshi Kaneshiro’s smiles to be the most brilliant.

When reporters asked when was the last time Ella met with Ron privately, she said, “I don’t remember. But we do not get in touch often. In an interview earlier, Ron wished Ella happiness. When Ella heard this remark from reporters, she was taken aback. “Great, it’s important to be happy.” Does Ella send good wishes to Ron as well? “Yes, may there be blessings for everyone. God loves everyone.” If Ella ran into Ron, she will say hello to him.

Despite not seeing Ella for a year, Ron indicated he will not feel awkward. When reporters asked Ron what he said to Ella at the Next Magazine Awards event, he replied, “Not much, just say hello. We haven’t seen each other and have not worked together in a long time.”

Ron also indicated he has not seen Elanne for several months. When reporters said he acted graciously in front of Elanne and Ella, he said, “Well, I am a man. Both Ella and Elanne dressed very elegantly and sexily. While posing for photographs, I should act graciously since I am a man.”

Elanne praised Ron for being a gentleman, as well as taking care of her during past filming collaborations. When reporters noted that Elanne’s dress was less sexy than Ella’s, Elanne said dressing sexily was not her normal image.

Jayne: Ron is wearing ugly shoes! And those cropped pants look like they came straight from Aladdin! The ladies look nice, but Ella seems a little cold in her behavior towards Ron.