Eliza Sam and Husband Like to Give Each Other Massages 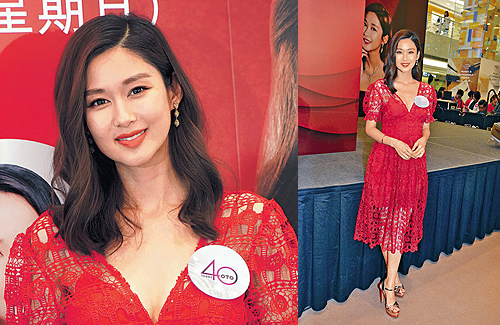 Eliza Sam (岑麗香) made a recent appearance at an event in a sexy plunging red dress. Although she has been married for nearly two years to Canadian-Chinese, Joshua Ngo, Eliza looks like a glowing and happy new bride. The secret to keeping their marriage fresh may be the mutual massages they give each other.

Despite being surrounded by earlier rumors that she is pregnant because her mother came to visit Hong Kong, Eliza’s slim appearance in a relatively tight dress shows no hints of a growing stomach. Eliza said that her husband hasn’t seen her dress yet, but she has no problems to wearing even more revealing clothing.

Returning from a holiday in Canada and getting back to work, Eliza was asked if her husband would give her a massage to relieve her tiredness. She replied that, she would do it for him instead, because his muscles would become sore after exercising. But, he would also return the favor by massaging her shoulders. She laughed, “This isn’t romance. It’s just basic needs”.

When asked about one of her best friends Christine Kuo‘s (苟芸慧) Hong Kong wedding banquet on October 19, Eliza said she’ll be there. A group of friends had initially planned to do an performance for Christine, but it’s still undecided as of now. As for Christine cancelling the traditional Chinese tradition of bridesmaids’ door games, Eliza said it would be more fun if there were a few games. It is most important to enjoy the wedding and everyone is happy and left with wonderful memories.

With her friends such as Leanne Li (李亞男) and Linda Chung (鍾嘉欣) becoming moms one by one, Eliza was asked if this prompted her to have a baby too. She expressed, “Just let things happen naturally. To be honest, being an auntie is fun, you get to play with them and you don’t have to be responsible.”