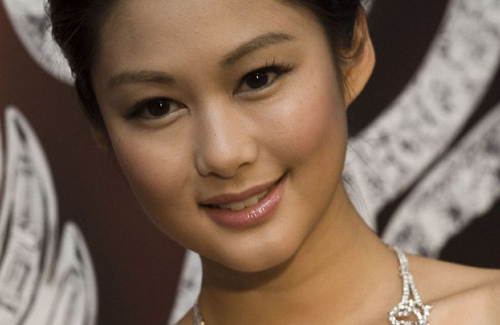 This year is already off to a great start for Eliza Sam (岑麗香). Riding on the success of her recent TVB dramas, Eliza is now in talks to play the female lead opposite Wong Cho Lam (王祖藍) in a new Patrick Kong (葉念琛) movie, Delete Lover <Delete愛人>. Eliza will play Cho Lam’s girlfriend and share an onscreen kiss in the new romantic comedy.

Eliza had previously made guest appearances in movie, I Love Hong Kong 2012 <2012我愛HK喜上加囍>, and starred in mini-movie Give Me 1 Minute to Say I Love You <愛在魅來1分鐘> with Raymond Lam (林峰).  However, her acting experience is even more limited than other Miss Chinese International winners, Christine Kuo (苟芸慧) and Leanne Li (李亞男).

Little is currently known about the film’s plot, but it is reported to be a heartfelt romantic comedy about love and family. Portraying a couple in love, Eliza and Wong Cho Lam will share an onscreen kiss, with more intense scenes to follow.

Known among male netizens as a “Goddess” for her sweet and sexy image, Eliza’s kissing scenes will surely generate major buzz for the movie. The film company is so confident about Eliza and Cho Lam’s pairing that it had given Patrick Kong unlimited budget to produce this film.

Speaking to the press during a photo shoot for the film’s promotional poster, Wong Cho Lam was supportive and enthusiastic in working with Eliza. When asked whether he had discussed with girlfriend Leanne Li about working with Eliza, Cho Lam stated that he had shared the news with Leanne. There is no reason for any concern, as the two hardly ever interfere with each other’s work projects.

Delete Lover will begin filming soon and be released in 2013.