Eliza Sam Has No Plans to Have a Baby Yet 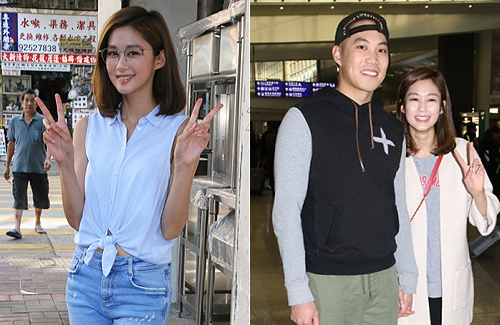 The cast recently filmed an outdoor scene despite the scorching hot weather. Eliza and Alice were both carrying handheld fans to cool off during filming breaks. Eliza also had to film an outdoor volleyball scene for the drama. Her wrists began to hurt from having to play volleyball. “It’s a little bit painful! It hasn’t affected filming though. My coworkers have been very kind and gave me some ointment to apply.”

When teased whether she would go home and ask her husband Joshua to help her apply the ointment, Eliza said, “No! Often times, I don’t get home until it is very late.”

After getting married in December last year, Eliza has been busy filming Heart of Greed 3 <溏心風暴3> and Apple Colada. After filming wraps up, Eliza can take a short break. “I’m looking forward to enjoying some personal time! I can also finally spend some time with my husband.”

On whether they will take advantage of her time off and spend some quality time on vacation, the 32-year-old actress shared, “We’re leaning towards that idea, but haven’t decided where we will go.” Will Eliza and Joshua take the opportunity to start a family of their own? “Not yet! We want to enjoy time together first. We’ll think about that after vacation!”