Nineteen-year-old Etta Ng (吳卓林) left home with her girlfriend, Internet personality Andi Autumn, to live to Toronto, Canada for half a year. Their photography business fizzled and after running into financial troubles, in which the couple allegedly couldn’t pay their rent for two months, they finally returned to Hong Kong to seek help from Etta’s mother, Elaine Ng (吳綺莉).

Etta described that registering for marriage with Andi was a surprise, and she denied using her father, Jackie Chan’s (成龍) , name in the marriage registry.

Elaine Ng admitted to reporters that Etta was back in Hong Kong, but she did not ask her about the marriage registration. When Elaine was asked if Etta will stay in the family home, she replied, “They said they wanted to find a place to live. They are adults and I have to respect that.”

Etta to Join the Entertainment Industry?

As Elaine was busy with work and Etta’s return was so sudden, she enlisted help from her Mainland manager to pick the couple up from the airport. According to the manager, when Etta was in Toronto, she considered the possibility of settling in Thailand and did not rule out going back to the entertainment industry.

The manager stated that Etta felt that her personal life had been too publicized and will be more careful in the future. When asked if Jackie had been in contact, the manager replied, “No!” 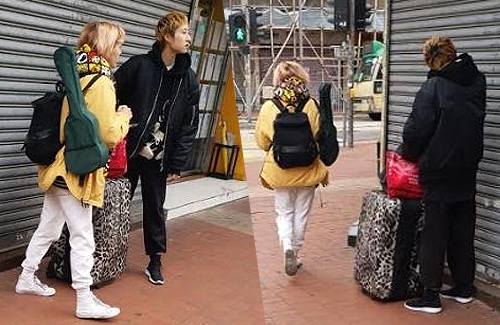 Etta Ng and wife, Andi Autumn, have been struggling financially and are moving again.