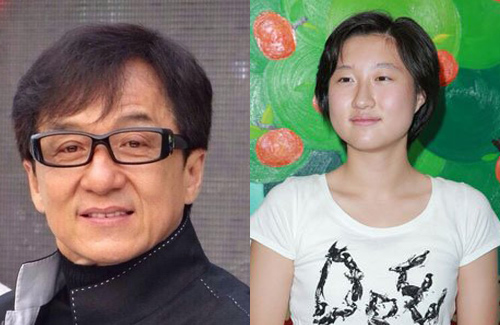 Elaine Ng (吳綺莉) gave birth to Etta Ng (吳卓林) after having an affair with Jackie Chan (成龍) in 1999. Claiming that she never received financial help from Jackie, Elaine first raised Etta in Shanghai before moving back to Hong Kong in 2010. While the mother-and-daughter often dodged speaking publicly about Jackie, it is known that Etta yearns to meet the father she has never known.

Despite appearing as a strong single mother, Elaine kept her struggles hidden away. When Elaine’s alcoholism resulted in physical skirmishes with Etta at home, the 15-year-old confided in her teacher, who subsequently called the police in March. The alleged child abuse case brought to light the struggles of Elaine and Etta, and many wondered if their burdens would be alleviated if Jackie had been a more involved father.

An inside source revealed that Etta longs to meet her Jackie, “After moving back to Hong Kong and constantly seeing Jackie’s news, Etta wanted to see her father even more. But Elaine is against the idea, so they are always arguing about it. Etta grew more rebellious and unfocused at school. Etta knows that her mother loves her, but without a father figure for so long, she feels it is an incomplete [family].”

At the same time, Elaine also faced immense pressure from her unstable career and the media’s constant questions regarding Jackie. Unable to deal with the stress, Elaine visited a psychiatrist. The insider shared, “Elaine also has her own problems. After returning [to Hong Kong], her career prospects were not ideal and [she had to deal with] people saying she is not professional. She has a lot of pressure and is often in a bad mood, so she drinks to numb herself.”

Despite their disagreements, Elaine and Etta still deeply care for one another. Witnessing her mother’s misery and unable to help, Etta became extremely unhappy. “Since Etta is so young, she couldn’t find a solution to the problem. She tried to cut her wrist. The school decided to call the police because they discovered the scars on her hand and knows that she has thought about committing suicide.”

While admitting that his irresponsibility has hurt Etta, Jackie does not have concrete plans to meet his daughter. He stated earlier,  “Sometimes, it is better to not talk about certain things. Let nature take its course! I know I am a celebrity, but don’t give me too much attention! If I see her, I’ll see her. I’ll do whatever!”