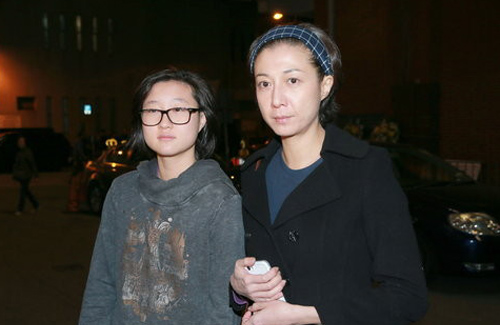 Known as the illegitimate daughter of Jackie Chan (成龍), 15-year-old Etta Ng (吳卓林) has experienced many ups and downs in the past year. Etta and her mother, Elaine Ng (吳綺莉), recently accepted an interview with the Hong Kong media, during which they talked about Etta’s previous encounters with spiteful classmates and their mother-daughter relationship.

Practically born under the eye of the paparazzi, Etta moved from Hong Kong to Shanghai when she was two years old in order to escape the media. However, because she grew up without Jackie’s involvement in her life, Etta never had the chance to experience a father’s love.

When she was young, Etta always felt jealous when she saw her classmates’ fathers picking them up from school or playing with them. However, she is now accustomed to life without a father, and though she is not angry with Jackie, she has no desire to meet him.

For some, having a celebrity father may be cause for celebration, but for Etta, her connection to Jackie actually caused her to be bullied at school. She revealed that when she was eight or nine, one of her close friends suddenly became hostile toward her and ordered her classmates to beat Etta up.

Another classmate would also frequently steal Etta’s worksheets, book bag, lunchbox, and other belongings and toss them into the garbage can. The situation became so severe that Elaine had to step in and speak with the perpetrator’s parents.

A single mother, Elaine has showered Etta with double the amount of affection in order to make up for Jackie’s absence. However, their mother-daughter relationship took a downturn in March when Elaine was taken into custody for alleged child abuse.

Since then, Elaine and Etta have reconciled, though Elaine is still quite strict towards her daughter. For instance, she knows all of Etta’s friends, and whenever Etta goes out, she must report her whereabouts to her mother. One time, Elaine even whipped Etta with a leather belt.

Despite the ruckus caused by the “child abuse” controversy, Elaine is thankful that it gave her the opportunity to reflect on herself. “The whole situation was like a slap in the face waking me up!” she said. “My daughter is almost 16 years old. I’m still looking after her like she’s six.”