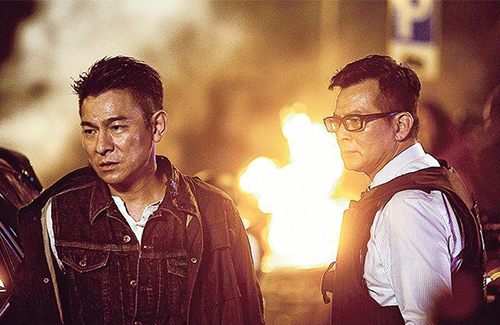 Andy, who is hospitalized and recovering from his back injury, won’t be able to promote his film in the meantime, but his friend and fellow Five Tigers member, Felix Wong, is glad to lend out a helping hand.

Shock Wave is Andy and Felix’s first film collaboration in 11 years. In the 2005 film Wait ’til You’re Older <童夢奇緣>, Felix and Andy played father and son. In the upcoming action flick, Felix will play Andy’s superior and handler while the latter was on an undercover mission.

One of Felix’s last scenes in the film was a car chase in Yuen Long. Felix sat in the passenger’s seat while the car was drifting and braking, Initial D style. Felix said he had a lot of fun. “Haven’t filmed a car chase like this in over 20 years,” he said. “It’s a lot of fun. I really wanted to drive the car myself.”

Andy asked Felix to appear in the film right when production was about start. Felix agreed to it immediately. He compared his collaboration with Andy like that of a dinner gathering. “It really feels like a bunch of old friends meeting up to chat and eat,” said Felix. “It’s a social gathering for us. Of course, I would also feel nostalgia working with him. I would remember the happy days we had together. The hardships as well. But after so many years, and see how far each of us have gotten, I can see that Andy changed a lot. He’s no longer the workaholic he used to be. He’s come to cherish his privacy and family. He’s a lot happier now, and I’m so happy for him.”

4 comments to Felix Wong Always On Call for Andy Lau