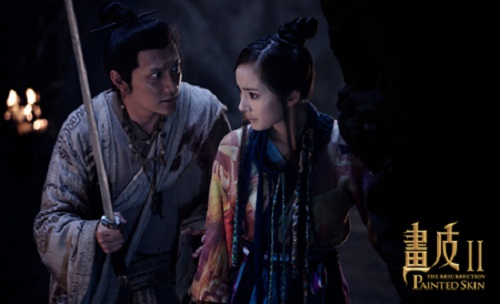 While Painted Skin 2: The Resurrection <畫皮 2> directed by Wuershan <乌尔善> received mixed reviews from both critics and general audience, the box office results cannot be refuted.  With the movie breaking box office records and bringing in $300 million RMB, there’s already speculation regarding a third installment to be filmed! Producer Pang Hong confirmed that the production of Painted Skin 3 is already in preparation.

With the success of the last two films, Painted Skin 3 will be highly anticipated.  It is in the best interest of the producers to capitalize on the current success and make the next movie as soon as possible.

However, some audience and critics claim that they had too high of an expectation and were thus disappointed with Painted Skin 2’s plot.  Hopefully, the third installment is able to steer away from the same predicament and provide an even more refreshing film for moviegoers.

With the confirmation of Painted Skin 3 in the works, netizens have started to boldly guess the next story line.  As the fox demon’s story concluded in the second movie, it is reasonable to assume that the next movie will be about the demon catcher, Pong Lang played by Feng Shaofeng (冯绍峰).   Painted Skin 2 already provided subtle hints on the future of his character leading netizens to further believe their prediction.

An inside source discloses that the reason for Feng Shaofeng’s recent disappearance is because he is preparing for an ancient fantasy film.  Feng Shaofeng is expected to complete 80% of the action sequences so he will not only be flying around, but become a true “kung fu master.”

Thirty-three-year-old Feng Shaofeng was born in Shanghai and well known for his roles on television such as The Drive of Life <歲月風雲> and  Palace <宫>.  Recently he admitted to dating Ni Ni (倪妮), known for her role as “Yu Mo” in The Flowers of War <金陵十三钗> claiming that he has met the right person.

If the speculation about the development of Pong Lang’s character in Painted Skin 3 is accurate, then this will genuinely be a breakthrough role for Feng Shaofeng, as his career as a major film star becomes even bigger!