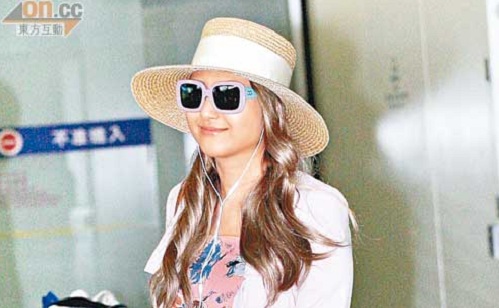 Macau casino tycoon, Stanley Ho’s (何鴻燊) eldest daughter with his third wife, Florinda Ho (何超雲) has been rumored to be dating actor Joel Chan (陳山聰) . Their relationship has been extremely ambiguous, clear as the bright skies one moment but cloudy like the mist the next moment. However before both parties can even officially disclose their relationship, they had to face several gossips from naysayers that there was a disparity of social standing and that the Joel doesn’t work while Florinda disregarded her father and went to date and tour Europe with him.

Yesterday, Florinda accepted an interview with Hong Kong newspaper, Oriental Daily, opening her mouth for the first time and admitting that she had been dating Joel for four months now. Besides that, her father, Stanley Ho, had already met with Joel. Florinda professed that her parents did not add a single bit of pressure into this romance.

Florinda Ho, who has been studying fashion design in the United Kingdom, finally returned back to Hong Kong. Yesterday at approximately 1 PM in the afternoon, dressed in a floral jumpsuit, a straw hat, and donning black sunglasses, Florinda emerged alone out of the arrival gates of the airport with her luggage in tow.

Florinda’s assistant and bodyguard who have been awaiting her arrival, immediately rushed up to fetch her whereas a group of more than ten reporters sprang up to chase Florinda to ask her why didn’t she left the arrival gates together with Joel. After constant pressing from the reporters, Florinda finally said that she wasn’t feeling well on her flight back and that she will explain things to everyone after settling back in Hong Kong. In the midst of the chaotic situation, Florinda saw a reporter who was trailing closely behind her, taking photos of her while on the escalators and reminded them to be careful of their own safety, in order to prevent any accidents from occurring. After leaving the airport, Florinda headed back to her domestic home in Bayview and retreated back to her “chamber room.”

It was known that during this trip back to Hong Kong, Florinda was accompanied by boyfriend Joel Chan and both of them sat at the same row in the first class cabin. Upon reaching Hong Kong, the couple split ways while Joel transited from Hong Kong and boarded another plane to Macau to meet his elder brother.

After returning to Hong Kong, Florinda Ho accepted an exclusive interview with Oriental Daily and sweetly went into details about her scorching hot romance with Joel Chan.

R: “This trip back to Hong Kong was particularly nervous for you?”

F: “Yes, I didn’t expect that there would be reporters the moment I landed. Joel and I are actually in a very difficult position. We weren’t holding hands when the reporters photographed us together.”

R: “You returned back to Hong Kong with Joel?”

R: “For the past few months, Joel was staying behind in England to accompany you?”

F: “No. During the month of March and April, Joel came to England to visit me. Because he had work to do and had to leave first, he only stayed for about five to six days (in England)”

R: “Could you kindly explain why you  haven’t returned to Hong Kong for so long?”

“Joel Is A Direct Man And Really Loves Me” R: “Why hasn’t Joel shown his face in public ever since he came back to Hong Kong?”

F: “He is in hiding. Because there have been many negative news (about him) lately, he doesn’t wish to come out and expose himself for the time being.”

R: “Are you and Joel dating each other?”

R: “When did you and Joel first start dating?”

F (In a sweet as honey tone): “Joel is very direct, attentive, and gentle. He really loves me.”

R: “Please excuse my straightforwardness but during Joel’s 7 days’ stay in Hong Kong, did he stay in your room, together with you?”

F: “No, I had a female friend who was sharing the room with me. Joel lived in the room next to mine. During his stay of seven days, I had to continue sourcing for materials for my exam but I did take time out to bring Joel around to shop, eat and do some sight-seeing together.”

R: “Aside from going out on dates, have your relationship reached the stage of cohabiting together?”

F: “We haven’t reached that stage yet.”

R: “There were many news reports outside, speculating that you only cared about dating and didn’t care about your father, even to the point of not coming back to spend Father’s Day with him, saying that your father was very unhappy.”

F: “Getting written this way, the reports really made me extremely upset. Actually my father (Stanley Ho) was never unhappy with me and did not ever blame me. My father knew I had homework to do thus why I couldn’t come back. I have always kept in contact with my father via telephone, even on such close terms to communicate via letters. Sometimes,
Daddy would say, ‘My daughter, haven’t seen you for the longest time; I miss you so much! When are you coming back to Hong Kong?” and I would reply, “Daddy, I miss you so much too! Once I have finished my assignment, I will immediately fly back to Hong Kong to accompany you!”

R: “News reports said your mother opposed to the idea of you and Joel dating?”

F: “No, no such thing (in a steel and determined tone) Actually my mother has accepted Joel since a long time ago. She knew we were dating. Even Mommy felt that Joel has a rather good personality. Daddy has also seen Joel. My parents completely did not object to our relationship. They feel rest assured towards our relationship and didn’t give me any pressure at all.”

Florinda Ho’s love’s was not only direct but also brave, even encouraging boyfriend Joel Chan to face all the different negative reports out there.

R: “For a long time now, Joel has been involved in a lot of these negative news reports, saying that he didn’t go to work and only concentrated on accompanying you and at the same time saying that you only cared about dating. Did you guys give some thought about those news and did you talk to Joel about his work matters?”

F: “I did discuss this with Joel, encouraging him that it wasn’t worth it being unhappy over those negative news reports and that he had to face them (the negative news reports) somehow since he still has to return back to TVB and start filming again sooner or later. (Referring to TVB’s executive producer, Tim Gor’s (李添勝) My Cruel Lover ＜我的如意狼君＞?) Yes, Joel will resume work on it. I told him, you don’t have to care about those negative news, it’s not like you killed someone or committed arson, what’s there to be scared of?”

R: “In the past, there were rumors about you and Pakho Chau (周柏豪)?”

R: “Just as what Pakho said, you guys are friends now and will still only be friends in the future so not planning to change your relationship with each other?”

F: “Yes. We have no intentions to change our relationship.”

F: “He did call to talk about those rumors, we talked about them over the phone.”

Ah K: From the way Florinda talked Joel into getting out there and facing those negative reports and comforted him (when the role should be reversed), Florinda striked me as a person with a very mature mindset (as compared to Joel) and a high EQ (judging from the reports above, not recounting the time when she allegedly blasted Pakho Chau, “You should be ashamed of yourself”)

Instead of hiding at home like Joel, she chose to take the first step and bravely accepted a “no holding back” interview on her own accord (probably to lessen the public backlash on boyfriend Joel) Maybe because Florinda is practically half a westerner after living abroad for so long hence the boldness and outspokenness from her.

Joel is no doubt irresponsible for dumping the series on Tim Gor and leaving without a word. Even to the extent of not picking up calls from his colleagues as proven by Sharon Chan (Sharon Chan said that she called up her godbrother Joel to find out what’s wrong but he didn’t pick up her calls)

He probably has to face his colleagues’ and TVB’s criticism and the media scrutiny for his disappearing act but as Florinda said to him, it’s not like he killed somebody or committed arson, what’s there to be afraid of? There’s nothing wrong in pursuing your own love but with much more work responsibility, of course. Or unless the previous media reports were proven to be right that he was probably hankering after Florinda’s wealth and didn’t even think of going back to TVB and planned to leech off Florinda’s family for the rest of his life?

28 comments to Florinda Ho: “I Am Dating Joel Chan!”