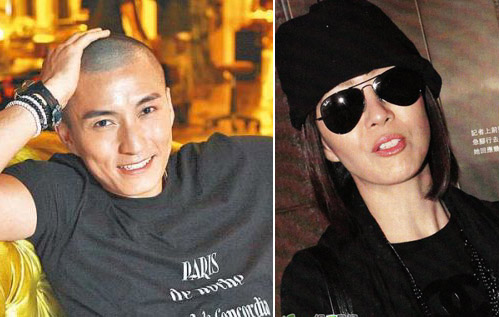 Macau casino king Stanley Ho’s (何鴻燊) third wife’s daughter, Florinda Ho (何超雲) received her parent’s silent approval and acceptance of boyfriend Joel Chan (陳山聰). Upon returning to Hong Kong recently, Florinda the heiress took action. After a good day of rest, she anxiously went to Yang Ming Shan mansion yesterday evening to meet her boyfriend, Joel. The couple was only apart for half a day and had already rushed to meet each other. It appeared that their romance was boiling hot!

Past and rumored boyfriends sent their well-wishes to Florinda one after another. However, Joel’s ex-wife has yet to say anything about this but instead used Weibo to convey her feelings and tweeted that there was no point being hung over a man who had been snatched by a third party, while clearly enlightening things from such a subtle hint.

Risking dumping away his TVB rice bowl, Joel persisted in accompanying Florinda on a tour of Europe to nurture feelings between them and thus winning the heart of the heiress. After returning to Hong Kong, Florinda confirmed to her family that Joel was her boyfriend. Last night, casino king Stanley and his third wife especially requested to see their prospective son-in-law, Joel and judge for themselves about his “quality.”

Through a three-hour get together, Florinda received her father’s approval about her romance with Joel and wrote on Weibo at dawn, “Finally reached home, haven’t had dinner with everyone for the longest time and especially missed my dad…. It was aextremely emotional! One simple dinner of normal dishes and one ‘good friend’ who was invited by  my parents, had received my family’s support.

“Our feelings for each other are stable, just thinking back about it makes me feel loved and satisfied. Grateful to everyone for all your well-wishes…I’m really touched! At the same time, I hope the media and reporters would give us a little space…today has been way too tiring for you guys!” Florinda’s comment suggested that it has been tough for the paparazzi to follow them around all day, including waiting at the restaurant for the family to finish dinner.”

Netizens Admire Joel For Not Having To Work Again

Joel was chauffeured from Florinda’s mother’s apartment to Mayfair in the car usually used by casino king Stanley. This led everyone to think that Joel was immediately moving into a luxury house (at Mayfair) under Stanley’s request, thus successfully elevating his status. However, as it turned out, Joel was only at Mayfair to meet with his friend. Afterwards, his friend drove him home and then returned to his own home in Yang Ming Shan mansion.

Yesterday afternoon around 5pm, Florinda walked out of her family’s apartment and wore a low-cut outfit, looking like a French woman in her get-up. Florinda then walked towards the gate and boarded a car. While walking, she let the media snap all the photos they wanted and didn’t seem to care, clearly in high spirits. However, Florinda declined to answer any questions as she was anxious to rush over to Joel Chan’s apartment to see him. The couple was indeed inseparable! Sources also cited that Florinda whipped up a dinner full of love on her own for Joel that night.

As Joel Chan has already stepped half a foot into the Ho family’s luxury door, many netizens expressed their admiration of Joel not having to work again and living leisurely for the rest of his life. However, according to insiders, during the gathering that Joel met with casino king Stanley, besides vowing to treat Florinda really well, Joel also pledged to work hard on his job. If Joel wanted to succeed in becoming the Ho family’s son-in-law, it wasn’t exactly going to be a piece of cake as he still has to overcome many tests.  Fortunately for Joel, Stanley’s first impression of him wasn’t too bad at all.

Joel’s Ex-Wife: “A Guy Who Is Actually Good In Nature Will Not Be Snatched Away

Florinda’s ex boyfriend, Eric Ho (何敬豐) and rumored boyfriends, Steven Cheung (張致恆) and Pakho Chau (周柏豪) sent their blessings one after another. Eric Ho tweeted on Weibo, “Congratulations! Seeing that you were willing to take the first step, felt that you have really grown up. Cherish your life and wish that you will always be happy and cheerful.” Steven Cheung tweeted, “Isn’t it good this way! I don’t feel that it’s a trouble, I will definitely support you!” Not only that, even Florinda’s younger sister, Laurinda Ho (何超蓮) sent her well wishes.

On the other hand, Joel wasn’t as lucky as Florinda. Besides receiving words of sarcasm from many netizens, his ex-wife, Ponny Yeung posted a paragraph on Weibo, “Towards a girl who snatched your boyfriend, the best ultimate revenge is to let her have him, because an actual good man will never be snatched away by others [seemingly hinting that if he was really a good man, he wouldn’t be tempted by a third party to leave this woman].” Ponny also placed a thumbs up emoticon beside that paragraph to express her approval.

Sharon Chan (陳敏之) who used to be long-time buddies with Joel Chan but has since fallen out with him due to his disappearing act, said blandly yesterday, “I only knew about it (Joel’s romance with Florinda) from the newspaper reports. Well, as long as he’s happy. It is very normal to date. I don’t wish to comment on other people’s personal affairs.”