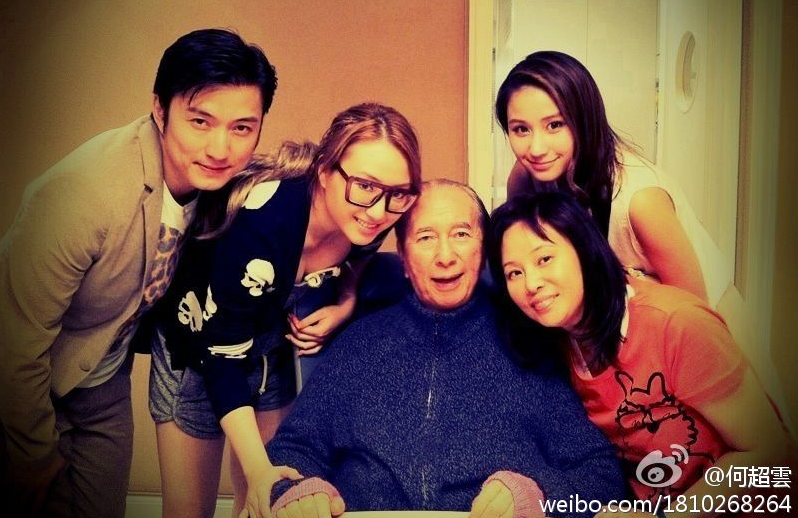 Yesterday, Joel accepted an exclusive interview with Oriental Daily and recounted his dining experience with casino king Stanley. As it turned out, Stanley was a TVB drama fan and had seen the television dramas Joel had starred in. Joel professed that he loves Florinda and when asked whether he thought of marrying Florinda, he replied, “We haven’t thought as far as marriage yet!”

R: “After Florinda publicly disclosed your lover relationship with her, it seems like a lot of people congratulated you thereafter?”

J: “It’s a case of too many people calling me but I didn’t pick up their calls as it was way too tiring.”

R: “Yesterday night was the first time you shared a table and had dinner with casino king Stanley Ho?”

J: “It’s the first time we ate a dinner together. Actually, before this, we have seen each other once.  However that one time was at Mr. Ho’s residence, everyone only said ‘Hi’ and saw each other’s faces. Last night was the first time we dined together hence I was very nervous.”

R: “Did you and Stanley chat with each other?”

R: “Did Stanley ask you to favor Florinda more?”

J: “No, he didn’t mention anything about that. He did ask me about my work though. In the past, he has watched me act as an emperor in Relic of An Emissary <洪武三十二>。

J: “(Smiled happily) No, he didn’t say that but he did ask me how old that emperor (that I acted as) actually was.”

R: “What else did you guys talk about?”

J: “Towards the end of the dinner, everyone took a group photo together and Mr. Ho took a rest so I didn’t wish to disturb him.”

R: “There were some hearsay from the press that Ina didn’t like you?”

J: “Those were just rumors! Aunty (Florinda’s mother) did ask me to come along for dinners with them so it can be seen that those rumors were not true.”

R: “Florinda publicly announced your relationship with her, finally a sigh of relief for you?”

J: “Not really a sigh of relief, we are indeed dating. We don’t wish for it to affect too many people. We mutually discussed it with everyone. Her family gave her some opinions and we only disclosed it when everyone was okay with it.”

R: “Outsiders are calling you the future son-in-law of the casino king. What are your thoughts on that?”

J: “It’s not nice to say it that way. We are only dating! One love, one relationship, everyone have been too exaggerated. Dating means dating; I never thought too much about it! As per usual, I am going to earn money and think about work; I will be filming Lee Tim-Shing’s (李添勝) new drama My Cruel Lover <我的如意狼君> soon so I must recollect my feelings and listen to the script later.”

R: “Did you make any promise to Florinda?”

J: “Concentrating fully on my work is the best promise I can give her, putting career as my top priority, as well as treating her well lahs!”

R: “The outside world has been taking both of your status as a comparison, describing it as the woman (Florinda) being more superior than the man (Joel) (女尊男卑), what do you think about this?”

J: “There have been many different voices outside on this. Some congratulated me; some objected to it. We expected that so we won’t care about it. I was single and Florinda was single too.  Both of us already knew earlier that we came from different backgrounds. Since we were able to come together as a couple, we didn’t want to care so much about it.

R: “Have you ever thought of marrying Florinda?”

Joel laughed, “We haven’t thought of marriage yet, just purely wanted to date.”

Casino King Stanley Ho Knew That Joel Was A Divorcee

R: “You have been divorced before. Will your previous divorce become an obstacle to this relationship?”

J: “The matters in the past have blown over. Everyone has a different past of their own and we are taking this time to start a new beginning.”

R: “Did Stanley Ho and his third wife (Florinda’s mother) know you have been divorced in the past?”

J: “Should be, I think they should had known since it was written in the newspapers. Florinda did tell them about it but I didn’t ask too much. I didn’t want to be adversely affected by the matters of the past.”

R: “Do you have faith that this relationship with Florinda will advance further?”

J: “We just started on this relationship, give us some time and space for us to try it out and understand each other better. I am quite confident lahs. I hope to date comfortably and engage in normal couple activities like eating and watching movies together.”

R: “This upcoming September you will start filming another new series. When that day comes, won’t you be too busy working and as a result, neglect your girlfriend Florinda?”

J: “Nope, I won’t. Florinda will adapt and understand that it’s because of work.

R: “Since you guys are dating, are there any rules that both of you adhere to? Like how many phone calls to dial or messages to text each other everyday?”

J: “No, nothing special. We just started taking baby steps into this relationship. We will definitely call or text each other; it’s only natural to do so.”

Confessed That Florinda Was Hard To Woo

R: “When did you first started courting Florinda?”

Joel laughed happily, “What?! Can I not say this? Well, it wasn’t deliberately.”

R: “Was Florinda hard to court?”

J: “Hard, who would say it isn’t hard? If I said it wasn’t hard, then wouldn’t it be very surprising?”

R: “What method did you use to pursue Florinda? By giving her flowers?”

J: “Every girl loves to receive bouquets of flowers lahs! I did some stuffs to make her happy lors!”

R: “Is it easy to make Florinda happy?

J: “Hard! Must guess what she likes! Normally, she will unintentionally reveal one or two things when she speaks and besides that, you have to observe what she likes.”

J: “She likes everything!”

R: “Florinda apparently said that she likes your attentiveness?”

R: “So far, what present(s) have you given Florinda?”

J: “I gave her earrings and a necklace.”

Able To Sustain Girlfriend Due To Financial Support From His Family

Being a TVB artist, it was an open secret that Joel Chan’s current income wasn’t a lot. Dating Macau casino King’s daughter, Florinda Ho who has an influential family background, it was inevitable that their background wasn’t on par. This caused the outside world to criticize this relationship as being the woman (Florinda) being more superior to the man (Joel) (女尊男卑) Fortunately Joel had his elder brother (who runs a business in Macau) as his financial backer thus being able to support him and his girlfriend Florinda.

R: “According to Florinda, there was a period of time (during your disappearance) that you returned back to Hong Kong but there was no sign of you in Hong Kong. So where did you go?”

J: “I went to Shanghai and stayed there for close to a month due to some domestic problems back home. It isn’t convenient for me to divulge what happened. Anyway, nearing the end of my stay in Shanghai, I got to know that Florinda was coming back to Hong Kong so I flew to London to accompany her before returning to Hong Kong together.”

R: “You haven’t worked in a long time so there wasn’t any income?”

J: “No, there is no such thing. TVB always gives us a basic pay. [The breakdown of a TVB artist’s income includes basic pay and appearance fees from attending events after deducting commission.] Maybe they might deduct some money if one is on leave but I checked my account before and nothing was deducted. It could also probably be because I had kept many uncleared paid leave.”

R: “Earlier, there were reports that you owed the travel agency about $40,000 HKD for the plane tickets and even went back on your initial promise of paying straightaway after receiving the tickets?”

Joel suddenly became serious, “About that matter, I want to clarify that on that fateful day, I assigned my friend to help me in finding a travel agency to order those airline tickets. I had already given the money intended for the airline tickets to that friend way before this. However, I didn’t expect that friend went back on his promise (in handing my money over to the travel agency). I would not overturn my promise just because of a few thousand dollars! Even though I have already explained, I doubt anyone will believe me so I’m leaving it for my manager to handle. I do not know this travel agency involved but they didn’t check what happened properly and accused me of something I didn’t do. I think that’s highly unprofessional of them.”

R: “Why wasn’t the money paid to the travel agency as promised earlier?”

J: “That friend of mine who was holding onto the money, fell sick and had to be hospitalized.”

R: “Were you unhappy that they said you went back on your earlier promise?”

Joel said in an agitated tone, “Yes, I was indeed unhappy because I wasn’t the one who called them to order the plane tickets. They (travel agency) wrongly accused me through the media without checking matters properly, it was as good as posting recruitment ads on the walls and telling the whole world. They didn’t even bother to notify me when it isn’t hard to find me/ I think that they have some operational problems in their professionalism and in maintaining their clients’ confidentiality.

J: “It’s normal; enough for me to spend on my daily life. My brother’s company in Macau would give me some money too.

R: “Taking care of a girlfriend isn’t a problem too?”

J: “I only buy small presents. Florinda also didn’t ask me to buy diamonds for her.

R: “How much money are you planning to earn or save before getting married?”

J: “I never gave that a thought. Florinda and I feel that it shouldn’t be measured through monetary means. If we really cared about money, then we wouldn’t have been able to get together. Both of us have a consensus. Dating means purely dating and not because of money matters. Many people said that I’m greedy but as long as my family and I know that isn’t true, nothing else matters. If any problem happens to appear in our relationship in the future, it definitely will not be attributed to money problems.”