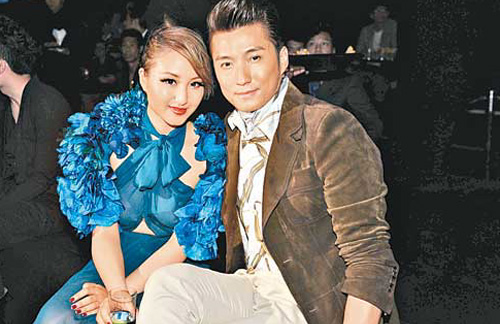 After Florinda Ho (何超雲) publicly announced that she was dating Joel Chan, the couple’s romance has been raging hot. Last night, Florinda even accompanied Joel to meet TVB high-ranking executive Virginia Lok (樂易玲) at a restaurant in Causeway Bay and the trio then socialized over an Italian dinner. Ever since receiving Florinda’s fondness, Joel Chan obviously become more carefree and content, even growing fatter as a result. While leaving the restaurant, Florinda even opened her mouth to defend Joel, “I am here for a job interview!” When asked whether the both of them would pair up as an onscreen couple too, Virginia responded, “I’m trying my best to persuade her.”

Ever since Florinda confirmed Joel’s position as her boyfriend, Joel’s prominence went up ten fold. Earlier on, Joel was revealed to have been allegedly “frozen” for fleeing to Europe to court Florinda without addressing things properly with TVB. However, last night, Joel was spotted with Virginia at a celebrity hot-spotting restaurant in Causeway Bay, “Da Domenico,” indulging in white wine, seafood and dining over Italian food. It can be seen that Joel was still highly valued by TVB. During the meeting, Florinda appeared to support her boyfriend Joel and even arrived to the restaurant beforehand with friend Vincent Choi to make the necessary arrangements. However, Virginia only arrived in a rush at approximately 9 PM at night.

During their meeting, the reporters looked in from outside the restaurant and saw Florinda and company sitting at a table near the entrance. Throughout their meeting, Joel continuously kicked up the atmosphere and when Florinda saw reporters taking photographs, she casually flashed a “V” hand sign whereas Joel who was donned in a deep V-neck shirt politely waved to the media. In the end, Florinda’s version of Be My Guest took three hours of dining before they settled the bill and left the restaurant. In the meantime, they also ordered ice cream for the reporters outside to quench their thirst and relieve the heat.

When leaving, Joel took the lead and held the door for the two ladies (Florinda and Virginia). The trio also graciously stood together for a group photo by the paparazzi. Asked whether there were discussions about work, Florinda quickly opened her mouth and spoke, “Job interview, I came here for a job interview!” Upon hearing Florinda say this, reporters immediately asked whether she would pair up with Joel as an onscreen couple and film together too. In reply to this, Florinda immediately replied, “Just saying this for fun!” whereas Virginia who was standing at the side, smiled broadly until her eyes disappeared for a brief moment and responded, “I’m trying my best to persuade her.” (Reporter: Then if she’s willing to, you would also be willing to?)  “But she (Florinda) is not willing to!” However, when asked what role does she want to act the most, Florinda delightfully said, “The Great Empress Dowager lor! I would want to be Empress Dowager.” Obviously in reference to her father, Macau Casino King Stanley Ho’s (何鴻燊) previous huge compliment of Joel’s past role as an emperor.

No Intentions to Enter the Entertainment Circle

Joel then stood at the entrance of the restaurant with Florinda to send Virginia off first. Joel who was donned in a Japanese fashion outfit, matched Florinda’s outfit perfectly. Although Joel looked fatter than usual under the nourishment of love, his abs was still extremely prominent and pressed against his shirt. After which, the couple went back to Joel’s residency in Hong Kong Parkview.

Following up, reporters clarified with Florinda whether she was intending to enter the entertainment circle and develop her career from there. In reply to this, Florinda denied and said, “No way! I was only joking!”